There are several titles that any Xiangqi (Chinese Chess) player can strive to obtain. Titles in Xiangqi need to be discussed on two different levels. On an international scale, the highest and most prestigious title would be the title of International Grandmaster, followed by International Master. On a local scale, most countries have the title of Grandmaster and Xiangqi Master. Earning a title would not only be proof of the player’s strength, but it would also be prestige and honor that could bring monetary benefits.

Awarding titles to players is to be discussed on two different levels: the titles given by a country to their players and the titles conferred by international organizations.

On a local scale, each country would have its own criteria to award titles. The relevant criteria are determined by the local Xiangqi Association overseeing Xiangqi activities in that country.

Each federation would issue titles to players who have met the required criteria. However, the titles that were conferred would be restricted to the tournaments that the federation had organized.

Before 2018, there was no unified title of International Grandmaster or International Master. After 2018, the titles for international players from the WXF, AXF, and the EXF were unified by the WXF. 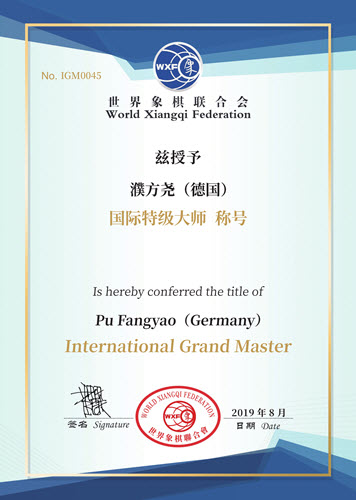 The article will be presented as follows.

The Required Criteria for an International Title

Eligible Tournaments and their Requirements

Unification of International Titles in 2018

How hard would it be for a player to earn an international title?

The Required Criteria to become Xiangqi Grandmaster in China

A Peek into the Grading System in China

The Title of Xiangqi Grandmaster in China

The Required Criteria for an International Title

In 2018, the World Xiangqi Federation unified the international titles. It is also the chief (1) (1)governing body responsible for issuing titles. Tournaments by the AXF or EXF would also be granted WXF titles if players met the criteria. Therefore, an EXF Federation Master would become a WXF Federation Master in 2018.

The Webmaster asked around for some help and managed to obtain an English document of the official guidelines. It was translated by Mr. Romeo Xue, Secretary-General of the EXF, who also serves in the WXF. The Webmaster is grateful to Mr. Romeo Xue for his help and for his permission to publish the PDF here. (1)

The official article can be found on the website at the following URL, but it is in Chinese. There is a link which contains more specific information. (2)

The following summary is a short introduction to the requirements by the Webmaster.

Disclaimer: The translation of the original article is by the Webmaster to serve as a guide and introduction. HE WILL NOT BE RESPONSIBLE FOR ANY ERRORS OR CONSEQUENCES THAT MIGHT ARISE FROM ERRORS OR INACCURACIES IN TRANSLATION. THE READER OR PLAYER SHOULD DOUBLE CHECK WITH THE LATEST STIPULATIONS AND OFFICIAL ANNOUNCEMENTS BY THE WXF, AXF, OR EXF, which should be the official standard.

Eligible Tournaments and their Requirements

There are only three titles that are given by the WXF:

Note: The titles apply for both genders.

Please refer to the table given in the PDF by Mr. Romeo Xue.

Unification of International Titles in 2018

Before 2018, as mentioned above, the WXF, AXF, and EXF issued titles to players who participated in their tournaments and met the required criteria. However, the titles from the three different federations were not unified. A player who was a Grandmaster in one of the Federations might have been a Master in another. It could be confusing when trying to introduce players in such a manner.

How hard would it be for a player to earn an international title? 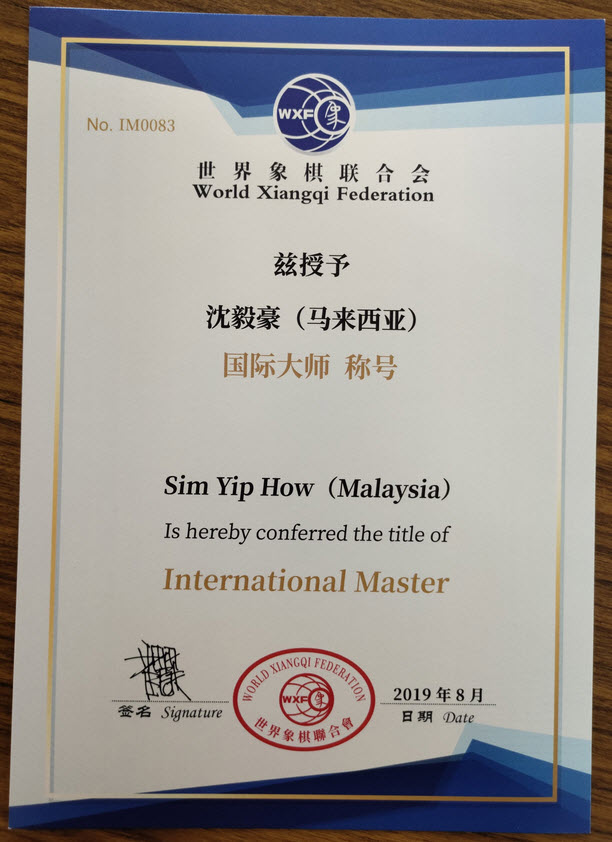 But, how hard would it be for a person to earn an international title?

In most instances, the player would have to win a national Xiangqi open or tournament or be placed in the top few positions to represent his/her country.

Secondly, international events where you could earn ‘points’ for international titles ARE NOT NECESSARILY HELD ANNUALLY. Many of these events were biannual.

What are the implications?

Therefore, for a player to pursue the title of International Master, he would have to be at the top in his country for a long period. Only then would he/she be able to represent the country in international events of the SAME FEDERATION and have a shot at earning the title given by the federation. For example, a player representing a country to participate in tournaments by the WXF would have to represent the country regularly. He would also need to perform well enough in the tournament to earn the titles of International Master or International Grandmaster. And as mentioned earlier, the relevant tournament was often not annual events.

This situation is especially evident in the case of China. Generally speaking, China has the world’s strongest Xiangqi players. The strength of the players from China is simply much stronger than the rest of the world. A Chinese Xiangqi Master would often be stronger than an International Grandmaster that was not from China.

Unfortunately, the same Chinese Xiangqi Master might never have the chance in his life to become International Grandmaster or International Master because his results were not good enough for him/her to represent China in international events. Even if he/she could represent China, it would be very hard for him/her to REPRESENT CHINA CONSTANTLY. HE/SHE WOULD THEN HAVE TO DO WELL ENOUGH TO HAVE A SHOT AT AN INTERNATIONAL TITLE. THE SAME PROCESS WOULD HAVE TO BE REPEATED FOR TOURNAMENTS BY OTHER FEDERATIONS.

The Required Criteria to become Xiangqi Grandmaster in China

By far, China remains the strongest Xiangqi country in the world. Professional Chinese Xiangqi players are considered to be athletes. They are governed by the Chinese Xiangqi Association (CXA) who oversees the tournaments and promotion of Xiangqi in China. China also has the world’s most comprehensive system of grading their players.

Disclaimer: The translations of the original articles by the Webmaster is to serve as a guide and introduction. HE WILL NOT BE RESPONSIBLE FOR ANY ERRORS OR CONSEQUENCES THAT MIGHT ARISE FROM ERRORS OR INACCURACIES IN TRANSLATION. THE READER OR PLAYER SHOULD DOUBLE CHECK WITH THE LATEST STIPULATIONS AND OFFICIAL ANNOUNCEMENTS BY THE CXA, which should be the official standard. The criteria are reviewed every four years.

A Peek into the Grading System in China

In a nutshell, there are many different titles in China. They include:

Local Xiangqi governing bodies would be responsible for issuing the relevant titles for Level 1 to Level 16 Xiangqi Players and also the title of Local Xiangqi Master. Schools who have earned the merit of being Xiangqi schools (象棋特色学校 xiàng qí tè sè xué xiào) to their resume can also issue the titles of Level 1 to 16 Xiangqi Player. These would be done through applying for tournaments that are recognized by the CXA and thus becoming eligible to issue titles by the local governing bodies. There are strict requirements for the tournaments themselves with many stipulations that must be met.

Another way to earn the title of Level 1 to 16 Xiangqi Player can be done by taking part in the online Xiangqi examinations given by the CXA. There are many other strict stipulations, like the required amount of time for a match cannot be less than 90 minutes, et cetera.

Xiangqi was able to take off in the latter part of the twentieth century because of the hard work of many people. Amongst these unsung heroes, the Webmaster would like to introduce the efforts of the late Zhang Xiongfei (张雄飞 zhāng xióng fēi 1912-1962AD) back in the 1950s. Zhang was an active Xiangqi promoter who lobbied for Xiangqi players to be treated as athletes to guarantee their livelihoods. The government would need to take care of the country’s athletes. This act would also ensure the continual development and passing down of Xiangqi from generation to generation. The Webmaster feels that the modern-day world of Xiangqi owes Zhang a huge debt of gratitude for his efforts.

In 1956, the first-ever Chinese National Xiangqi Individual Championships was held, and it marked the first time in history that a unified Chinese champion in Xiangqi was born.

The Chinese Xiangqi Association (CXA), the governing body, was formed in 1962. (5)

Note: The link to the OFFICIAL Chinese Xiangqi Association can be confusing, and this link should be the correct one.

Even though national tournaments began in 1956 and the CXA was formed in 1962, it was until 1982 that the first-ever criteria for grandmasters et cetera were available. There was a short but comprehensive article that could be found on a Chinese website that discussed this issue. However, only the major revisions were discussed. (6)

The Title of Xiangqi Grandmaster in China

The first criteria for Chinese Xiangqi Grandmasters were established in 1982 in China. The 1982 criteria were revised several times as the original criteria were too strict. To become a Chinese Xiangqi Grandmaster, you would have to win the Chinese National Xiangqi Individual Championships (CNXIC) three or more times. Before 1982, only Yang Guanlin and Hu Ronghua met the criteria.

Yang Guanlin proposed these very strict criteria and immediately drew the ire of fellow Xiangqi players. It was extremely hard to win the championship, and to win it for three or more times was downright impossible. Only Yang Guanlin, Hu Ronghua, Li Laiqun, Zhao Guorong, Lv Qin, Xu Yinchuan, and Wang Tianyi would be eligible Xiangqi Grandmasters if the 1982 criteria were used.

1984 Revision of Criteria for Grandmasters 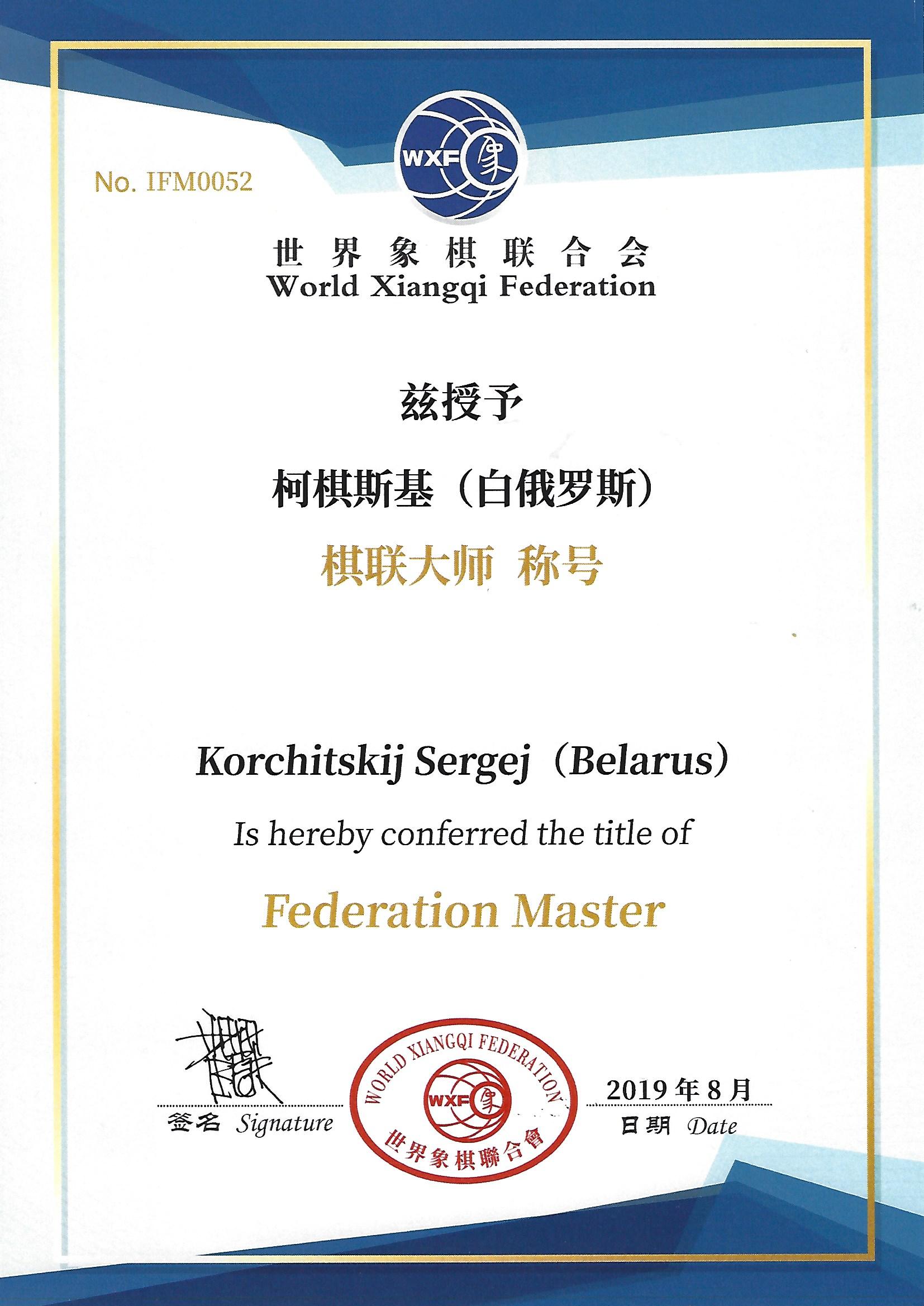 Beneficiaries of the 1984 Criteria included Li Yiting, Li Laiqun (who would later win CNXIC), and Liu Dahua. Wang Jialiang was also a beneficiary as he had the strength but simply not the luck required to become a grandmaster should the old criteria were used.

1998 Revision of Criteria for Grandmasters

The 1984 criteria were still too hard, and another revision was done in 1998. There were now five ways to become a Chinese Xiangqi Grandmaster:

2014 Revision of Criteria for Grandmasters

To date, the last revision of the criteria was made in 2014. It relaxed the original criteria further. In 2014, a player could become a Chinese Xiangqi Grandmaster if he met the following stipulations:

The ‘being on the championship team’ criteria has been one of the most heavily criticized criteria thus far.