Over the past few years, one of the highlights in the international promotion of Xiangqi was the spread of Xiangqi (Chinese Chess) in Belarus. The East European country is thousands of miles away from Asia or China, and it would seem to be an unlikely place for something like Xiangqi to be spread. But Xiangqi was not only spread to Belarus, it greatly flourished!

A short introduction to Belarus

As many of my readers are from Asia and the Americas, Belarus may not be well known. Hence, the author has provided some background information and demographics about the country. The information is from Wikipedia. (1)

Location: East Europe. Russia borders Belarus on the east and northeast. Going in a clockwise manner, Ukraine is located to the south, Poland on the West. Belarus's neighbors to the north include Lithuania and Latvia.

Population: Estimated to be 9.4 Million (20th most populous European country).

A short introduction to Sergej Korchitskij

Professor Sergej Korchitskij was born in 1976. He is a university lecturer for Latin at the Minsk State Linguistic University, one of the top Russian universities for linguistics and language education.

He is single and a fervent chess player of International Chess, Shogi, and Xiangqi. The author considers him to be a chess polymath with many credentials to back this claim.

The author had the privilege of meeting Sergej Korchitskij at Xingyang, Henan Province, China, in 2018. We have been in close contact since the mid-2010s.

The following is a short question and answer session between the author and Korchitskij.

Author: Please give the readers a short introduction about yourself. What form of chess did you start with in your career? What made you want to switch to Shogi? Why Xiangqi?

I started with IC (International Chess), then played the game of hexagonal chess called Glinsky, where I became the European champion and the strongest world player on August 1998, but Hexachess decreased in popularity after the decay of the USSR, so finally, I decided to try myself in Shogi, which is a fascinating game. 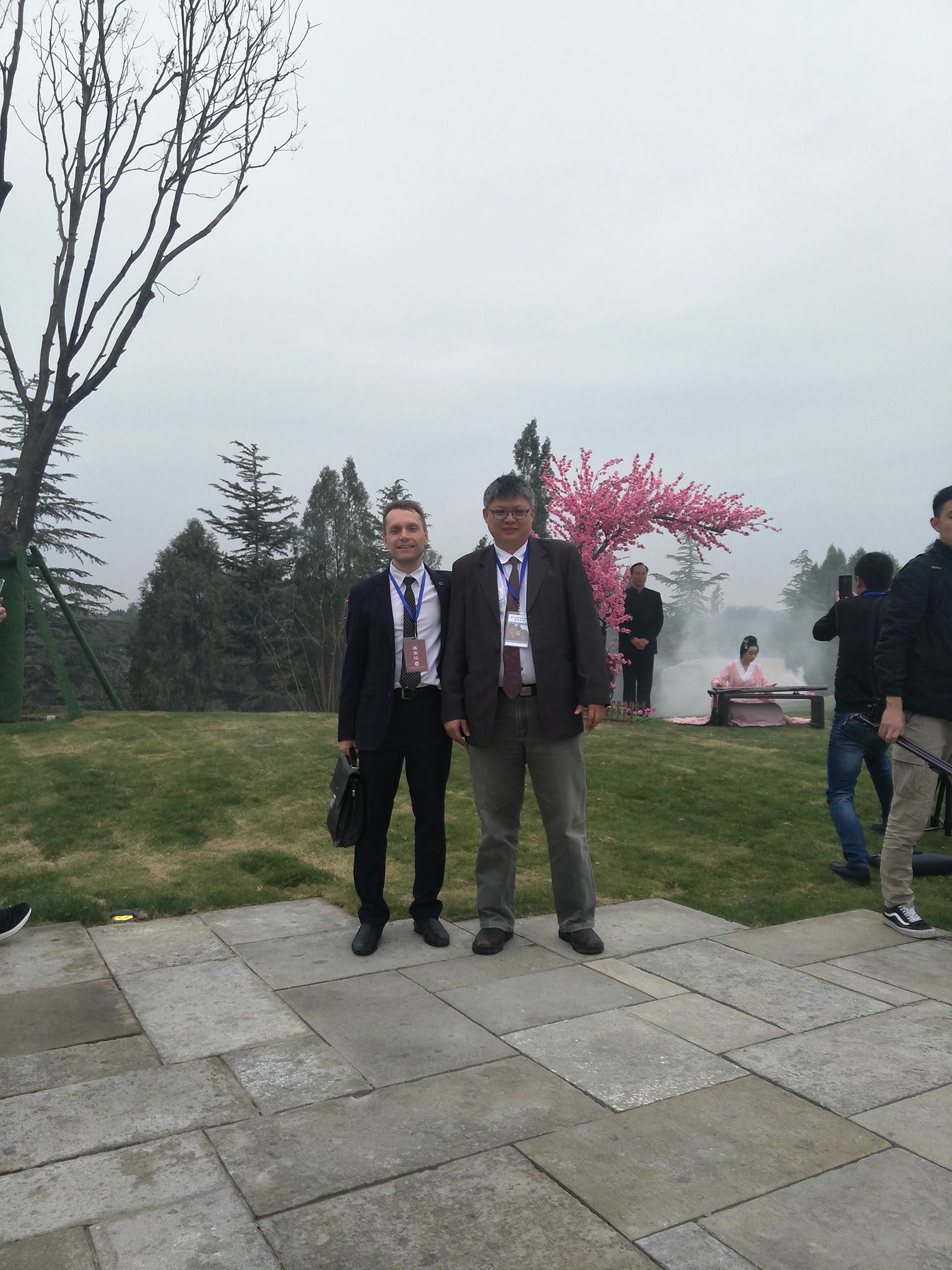 However, excitement is never enough, so finally, I started to play Xiangqi, which I want to thank the Xqinenglish website and my Vietnamese Facebook friends. Inside my country, Professor Ikonnikow was the one who did not let me sleep."

Author: What is your level of strength in different forms of chess: IC, Shogi, Xiangqi ...?

SK: I was runner up in the Belarussian International Chess Championship among juniors (1991). For Shogi, I was the former European Shogi champion (2013), and I have earned the rating of 5th Dan in Japan. I am also a WXF(World Xiangqi Federation) Xiangqi Master, and I may be one of the strongest Western players.

Author: Having several years of promoting Xiangqi in Belarus, what do you think are the problems that non-Chinese players wanting to learn Xiangqi are facing? What is your perspective on this issue?

SK: The language barrier. Most of the information is in Chinese.

Author: What is needed to promote the game? Activities like Tournaments? What about learning material and Xiangqi sets? How many venues are there available for playing Xiangqi in Belarus?

SK: Everything. Learning materials in English, many tournaments, a lot of cheap and expensive xiangqi sets in local shops for a budget of every family, xiangqi clubs, crowdy xiangqi servers with English as the primary language.

Author: How do you keep the flame burning?

SK: Feeling responsibility for the future of Xiangqi.

Author: What do you think is needed to promote Xiangqi? How to increase awareness of Xiangqi?

SK: Cinema can be very helpful. Exciting films and TV series about the past players, about the historical figures of the xiangqi world, about the connection of Xiangqi with the history and culture of China.

Author: What is the ideal environment that you wish to see? What about ranking systems in Belarus? What do you notice about Xiangqi on a local scale in Belarus? And what is your opinion about Belarussian participation on an international level?

SK: We need to have an official International ELO-list with changes after every national tournament. It adds dynamic to Xq's life inside.

Before the coronavirus epidemic, I enjoyed many various tournaments. I could meet and talk with famous GrandMasters like Wang Tianyi, Jiang Chuan, Xie Jing, Zhao Guorong, Zheng Yihong, and others. It was a priceless experience. I dream of seeing Chinese players in my country regularly. Their participation could inspire local players and make them loving Xq more and more.

Author: What do you think of the Internet and Xiangqi? Is the internet an essential vector in the promotion of Xiangqi?

SK: It's important to have an option to play online. We need TianTian in English with the option to install it on personal computers, not only to be able to play it on android phones only.

Author: What kind of assistance do you wished that you have in your efforts to promote Xiangqi?

SK: We need more international events in China, especially for children, after the coronavirus pandemic ends. To all of the above, I can add that we need thoughts. We would like to speak the same language with leading Xiangqi specialists from China. And last but not least, the more young players there are, the more we need sets to play.

Author: What do you think is the most important issue on teaching the next generation?

SK: All we need are more professional coaches and many useful books for them: puzzles, basics, openings step by step, et cetera.

Author: I would like to ask your opinion on some issues that have raised some debate over the year. For example, what do you think about Chinese inscriptions on the pieces versus Pictograms to represent the pieces or simply using 3 Dimensional Pieces for Xiangqi like in International Chess? Any thoughts on the possible industrial implications of Xiangqi? Finally, there are two sets of rules that are used for Xiangqi. The World Xiangqi Federation Rules (abbreviated WXF Rules) is the recommended gold standard. What are your thoughts on the issue?

SK: Chinese inscriptions are better for me personally. I am not sure about others. Maybe we need both types of pieces for different people. Chinese rules are much better too. International rules (WXF Rules) are weaker and a bit drawish. The most disappointing thing - no rule of 25 moves. Red can force a draw here, spoiling the game.

Author:  Belarus has been very impressive in teaching Xiangqi to young kids. Why have you invested the efforts that you have into promoting Xiangqi?

SK: Xiangqi is a funny game with good prospects. And we are coming into the age of the Chinese. Let's prepare well!

Author: What do you hope to achieve or see in Belarus with regards to Xiangqi?

Author: What is being done? How many children are actively being taught Xiangqi?

SK: Now during the pandemic, the main club at the China Cultural Center is closed. But thanks to the activity of my two deputies - Viktor Saevitch and Andrei Kaspiarovich, the work of children's xiangqi clubs has been established. In total, they teach about 80 young students. Totally we have around 100 xiangqi players in the country. I mean only local people, pure European.

Author: What is being taught?

SK: Not much yet, but we are in the process.

Author: Where is it being taught?

SK: Currently, there are five children clubs in Minsk.

Author: Who is teaching Xiangqi? Who do you wish to see?

SK: Andrei Kaspiarovich Andrei and Victor Saevitch are our instructors. They are indeed doing well. Andrei is the professional xiangqi coach nowadays. The 1st one and the only one in Belarus. I hope several strong young Belarus players could choose this path too in the future.

Author: What is your primary motto when promoting Xiangqi?

Where you can find Sergej Korchitskij on social media:

Amongst his efforts to promote Xiangqi and other chess forms, Sergej has several media platforms where he is very active.

The Facebook Fanpage called "Xiangqi in Belarus" is perhaps the most exciting fan page maintained in English and Russian. Please search for Xiangqi in Belarus on Facebook. The author is one of the moderators helping out to present more information about Xiangqi in English.

Sergej Korchitskij has his own Youtube Channel called Asian Chess TV, where he has made dozens of videos introducing Xiangqi, Shogi, and other forms of chess to his subscribers. It is one of the most exciting channels for Russian fans interested in knowing different chess forms.

Sergej Korchitskij has also been interviewed many times about his work in Belarus. There are several Youtube interviews with Sergej Korchitskij talking about chess and a variety of related topics. The links to the Youtube videos are given below:

Some photos of Sergej Korchitskij and his adventures in Chess 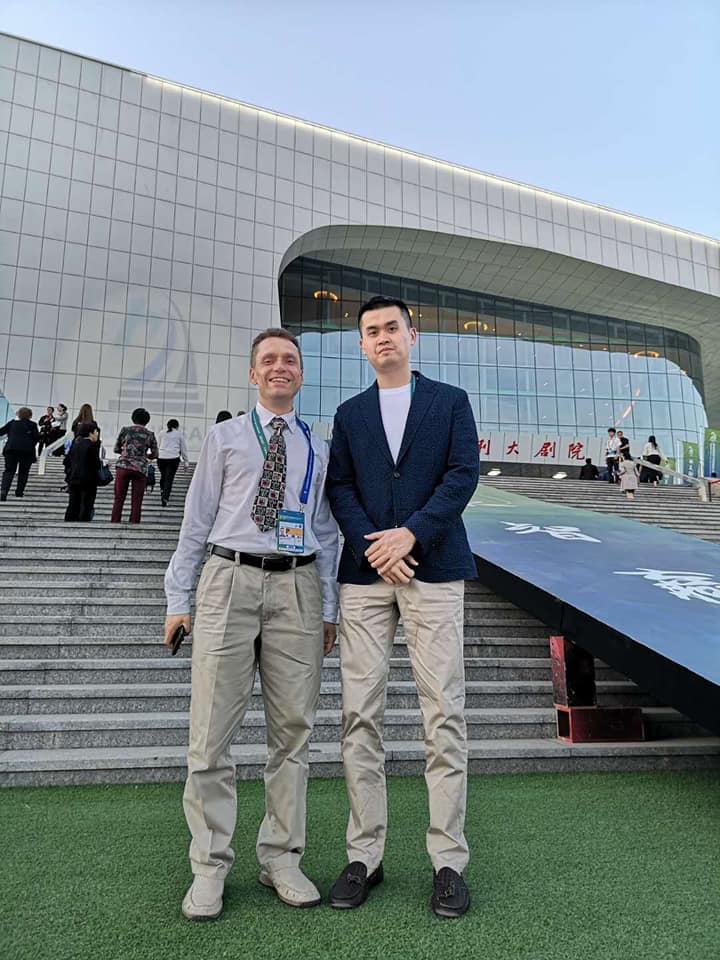 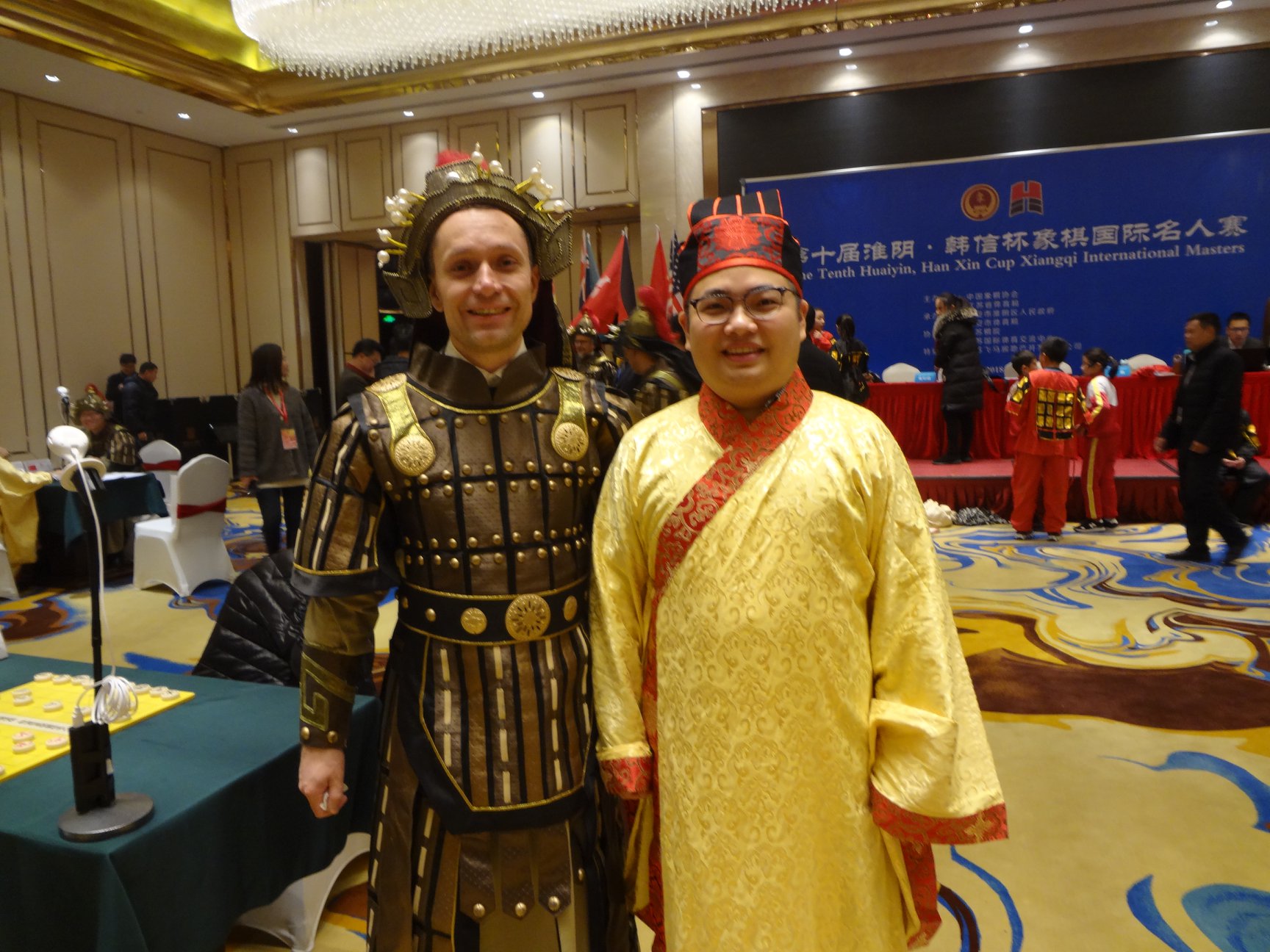 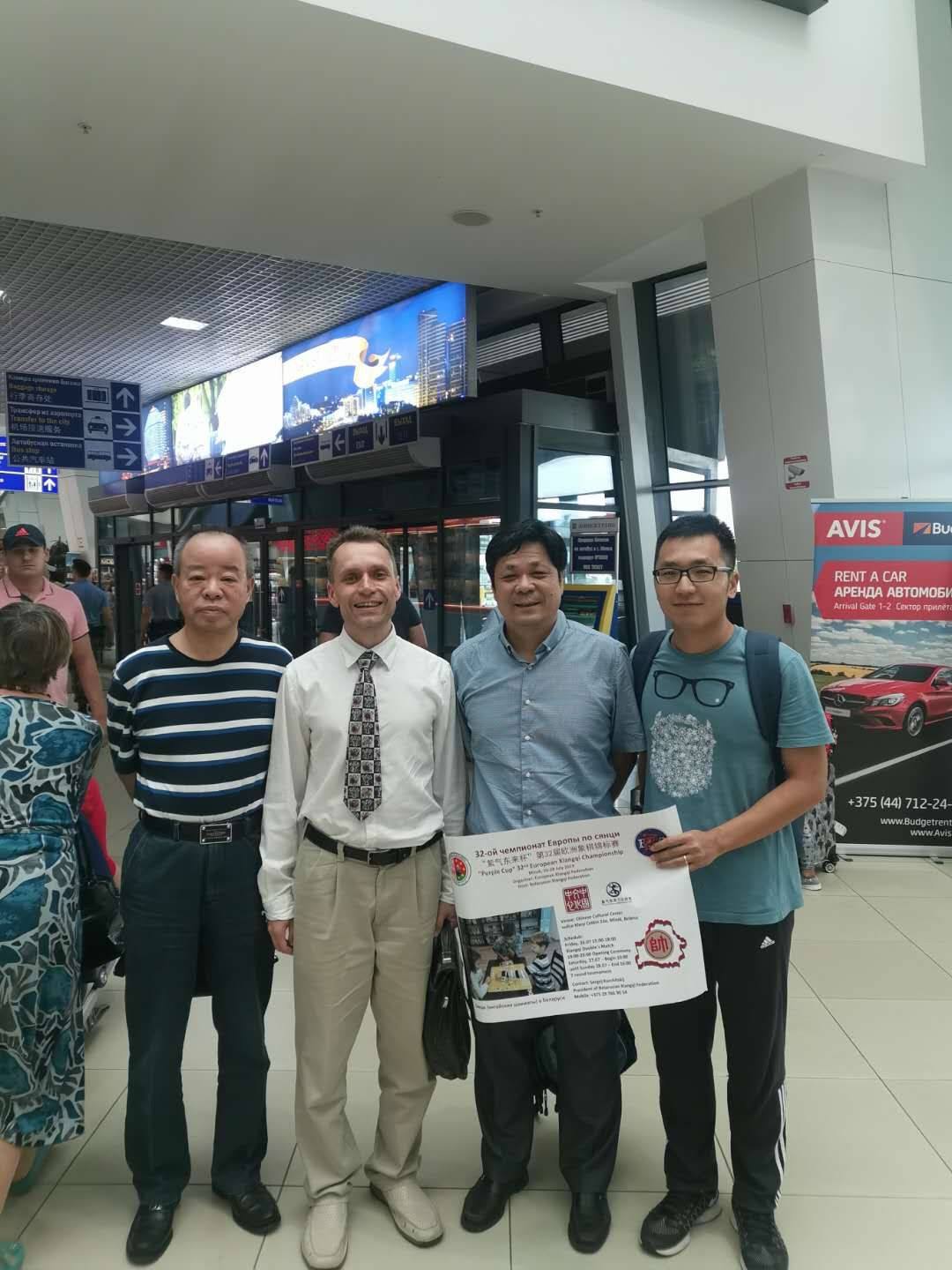 The author has been most impressed by Sergej Korchitskij for his personal accolades and his efforts to promote Xiangqi in Belarus. His achievements have been extraordinary, and the author hopes to see more Xiangqi being promoted to non-Chinese countries in the world with the same success that Belarus has!