Not long ago, a manager friend who was also a Xiangqi enthusiast asked me, “What culture could be found in Xiangqi?” I think many Xiangqi enthusiasts and leaders often ponder this problem. There are many examples of Xiangqi culture in everyday life, and I would like to take the opportunity today to express my own humble opinions. If it could help fellow enthusiasts in their daily managerial chores, I would be more than honored.

In Xiangqi, we often say refer to the opening, midgame, endgame, the four major endgame compositions, and various idioms like ‘there has not been any same game that has been played over the centuries’ et cetera. All these sayings have one thing in common: the game of Xiangqi itself. Indeed, as Xiangqi enthusiasts, we often refer to Xiangqi as a game which mirrors life, and we discuss Xiangqi regarding the games played. The Tao of Xiangqi would be the applicable to the Tao of life and vice versa. People proficient in Xiangqi are also able proficient in the matters of everyday life. In fact, a hierarchy of any unit would comprise of a leader, the leaders and the sub-units that they lead or manage.

（1） Organizing the troops and preparing for warfare, use the best people available to carry out the chores

The first step in playing a good game of chess is to prepare well. In Xiangqi, that would mean to position the chariots, horses, cannons, king, advisors, elephants and pawns to the best places available. If there were not enough men on the board in the opening phase, one would be significantly disadvantaged.

Therefore, the first step in preparing for war would be putting the right person at the right place. When there are men available to do their jobs, work will be done, and rewards can be harvested. These rewards are the result of the hard work of these men. That is why the worker is at the nucleus of management. If the king was not able to put the right person in the right place, for example, moving the chariot to the essential lines, or not giving the majestic horse room to run free, or failing to give the mighty cannon its cannon mount(s), these abled people would not be able to live up to their full potential, and the entire unit would not be able to live up to its expectations. Liu Bang managed to secure the services of able men like Zhang Liang, Xiao He, and Han Xin, and together, these abled men helped Liu Bang to win the throne. That is why, if the leader were not able to put the correct person in the best possible position, we could foresee hard times ahead.

After putting the right men at the right places, the next step would seem to be the actual fighting. However, it would be a wrong concept as we would have neglected the importance of establishing a system. For example, which piece(s) would be in charge of attack, which piece（s） would be responsible for defense, how would they be coordinated, what the strengths and weaknesses of each piece were et cetera. Coordinating the troops must be done beforehand, and this would be equivalent to what we often say as the rules of the game. If there were no rules of conduct, it would be impossible to carry out a game of Xiangqi. That is why, after assigning the men to their respective roles, the next step would be to set up sound regulations or a set of regulations whereby each member could follow.  This clear set of rules and regulations would oversee each of the units and its members. If there were problems to be solved, these problems or challenges could be dealt with following the system.

(3) Allowing the horse to jump and the chariot to move, strike the enemy’s principal weaknesses

To win a game of Xiangqi, it would be critical to mobilizing the troops rapidly in the opening phase. Especially noteworthy are the major pieces (chariot, horse, and cannon). If these major pieces were able to be mobilized rapidly and participate in the attack early, they would impede the development of the enemy pieces.

The saying of “if the chariot is not moved within three steps, it would be a loss’ would refer to this tenet. The manager or a leader of a unit should try to get his men and various departments into action as soon as possible. The Chinese saying that ‘a new official would often light three fires’ would be the equivalent of the saying ‘a new broom sweeps clean.’ Indeed, the ‘fires’ should be ‘lit’ in the important departments such that they would perform to the best of their abilities. It would be like the Xiangqi saying, ‘ten enemy pieces shudder at the presence of a chariot.’

(4) Making plans for the long run

To play a good game of Xiangqi, the ability to see as deeply as possible and to think as clearly as possible would mean that the moves played would be accurate. It would be what the Chinese saying ‘plan well before you execute.’ The decision made after analyzing for three moves and analyzing for five moves ahead could be radically different or even the exact opposite.

As the manager of any unit, the same principles would apply. The manager or decision maker must take into consideration the trends in society and the policies of the government, and make decisions that would be feasible in the long run. If each detail could be taken into consideration while the big picture is not lost, the prospects would be rosy. Only when a manager can make the correct decisions that the men working under him would be well integrated and not lose the big picture like players on the Xiangqi board would often do.

(5) The King must move with caution and liberate himself

A good Xiangqi player would not move his king without any good reason. If the chariot, horse and cannon et cetera were able to be played correctly, the king would not be in any grave danger and could make plans in peach in his army camp. If the leader or a commander were not able to give power or give power to his men to do their jobs, then he would be the one who would be busy and bothered with all sorts of trouble. Only when the leader was able to free himself from these nuances that he can really sit down and plan for the big picture.

There is simply too much philosophy that is encompassed in Xiangqi. For the Xiangqi enthusiast, it would be important to think correctly and practically, to keep improving oneself and be brave to take on challenges to prove that his ideas were correct.

About the author, Ba Yanchao by Jim. 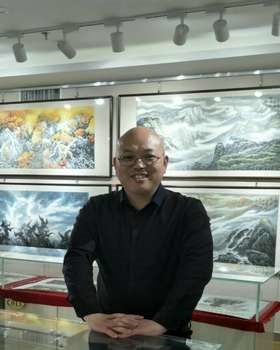 During one of my Xiangqi trips to China, I had the honor of meeting with several important officials and fellow Xiangqi enthusiasts from Xingyang, He-nan China.
One of them was Mr. Ba Yanchao, who serves in the Chu River and Han Border Cultural Promotion Center of Xingyang City in He-nan Province, China. The cultural promotion center is instrumental for having held the Million Dollar Xiangqi Match every two years, where the GM Zheng Weitong defeated GM Xie Jing to pocket the One Million Dollar Yuan purse in 2016. To date, Xingyang is pushing to become the Xiangqi capital of the world.
Pictures of Xiangqi promotion in Xingyang, China
Mr. Ba is a Xiangqi expert and enthusiast and has written several books Xiangqi. He was a co-author with Mr. Wang Juqun （whom I had the honor of seeing him play Xiangqi) in their best selling series Consecutive Kills in Xiangqi, which is divided into three volumes and further divided into many puzzles with kills with one move, two moves, three moves, etc up till 8-10 moves.
Their books can be accessed at the following link.