When discussing the heroes of Xiangqi, one of the names that would be brought up would be Wen Tianxiang (文天祥1236-1282AD). Although he was more known for his patriotism, Wen Tianxiang was also an avid fan of Xiangqi. He was also one of the earliest people to have been recorded playing 'blindfold' Xiangqi.

This article would introduce the life of Wen Tianxiang, his love for Xiangqi, and also what Xiangqi might have been like towards the end of the Southern Song Dynasty.

Note: The term 'chess' refers to games of intellect like Weiqi and Xiangqi in this article. It is NOT used to refer to International Chess, which could not have been found in China during Wen Tianxiang's time.

Brief Introduction to the life of Wen Tianxiang

Wen Tianxiang. was a Chinese poet and politician who lived towards the end of the Southern Song Dynasty (1127-1279AD). When Kublai Khan invaded China to establish the Yuan Dynasty (1271-1368 AD), he refused to yield despite the Kublai Khan personally asking Wen to surrender. Wen adamantly refused and was imprisoned in 1278AD. He was eventually put to death.

Wen Tianxiang left many poems that are still being recited. Because of his unyielding loyalty to the Southern Song Dynasty, he has been revered and even deified as a symbol of loyalty and patriotism.

The interested reader may search for the many poems by Wen Tianxiang. If you were to read many of the poems by Wen, the ideas of Xiangqi and chess were nearly ubiquitous.

Wen Tianxiang was also an avid fan of Xiangqi. According to modern-day Xiangqi historian Professor Zhang Ru-an, Wen Tianxiang had the genes of chess playing in his blood.

Wen Tianxiang was influenced by his grandfather and father and gradually fell in love with playing chess. His passion for chess can be illustrated in his many poems, whereby the word '棋' (the Chinese character for chess) could be found. (2 p. 168)

The poet was known to have played Xiangqi with local experts and could hold his own against them. He played Xiangqi throughout his life and always made time for his pursuit no matter how busy he was.

Even towards the last days of his life, it was recorded that he would play Xiangqi when he was imprisoned. Tragically, he was separated from Xiangqi the day before his death when the Yuan authorities ordered that his chess sets and brushes for writing were confiscated.

According to Professor Zhang Ru-an, the development of Xiangqi in the Jiangxi area or modern-day Jiangxi province (neighboring Fujian province) was an important period in the history of Xiangqi.

The economy was booming in Jiangxi, and it became one of the wealthiest regions in China. Despite ceding the northern lands to invaders, the Song Dynasty renamed Southern Song Dynasty, was still extremely prosperous, and the inhabitants enjoyed decades of peace and prosperity. One of the main reasons why the Southern Song citizens were able to do so was because of Jiangxi's prosperity.

Towards the end of the Southern Song, Jiangxi produced many patriots. Interestingly, many of these patriots loved and played Xiangqi. Amongst these patriots, Wen Tianxiang was widely regarded as the central figure.

One of the earliest mentions of grading players

Xiangqi was well established by this time, so much so that Wen Tianxiang was able to grade the strength of his time's better players based on their games. There is a short poem called 《象奕各有等級四絶-品四人高下》 (xiàng yì gè yǒu děng jí sì jué pǐn sì rén gāoxià) where Wen graded strong Xiangqi players of his time according to four categories.

The top player of the Jiangxi Xiangqi Sect was Zhou Zishan (周子善 zhōu zi shàn,?-?). Other notable names include Xiao Gengshan (萧耕山), Liu Cheng (刘澄) and Liu Mu (刘沐). As for Wen himself, he could hold his own against Zhou Zishan and defeated Liu Cheng and Liu Mu. Wen Tianxiang's poem has been regarded as one of the most informative poems on Xiangqi during that time. (2 pp. 169-172)

According to a collection of his works, Wen Tianxiang loved to bathe in the river during summer. While bathing, one of his favorite activities was to play Xiangqi with his friend Zhou Zishan (周子善 zhōu zi shàn,?-?). They would play Xiangqi without looking at the board and shouting out moves. (4)

Apparently, Wen Tianxiang was not afraid of the cold and would immerse in the river for hours even after his friends had left. It was said that the longer he immersed himself, the merrier he would get. (5 页 72) (2 p. 172) (6)

The relevant passage, in traditional Chinese, is given below: 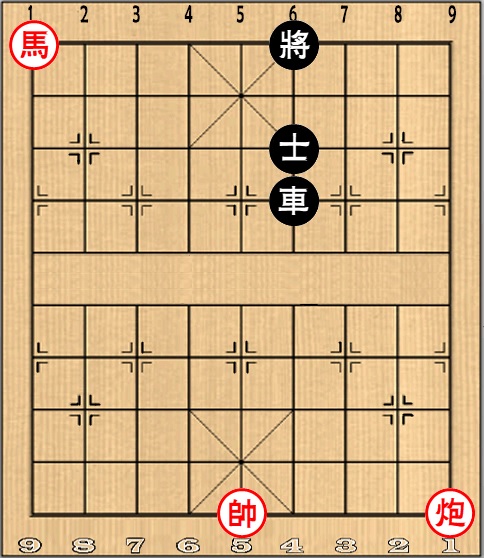 The Red Cannon would pin all the Black pieces to the rib file. The Black Chariot can only move in the same file.

The next step would be for Red to bring his Horse to the right flank for the attack. However, there are two obstacles:

b) the Black Chariot and King would attempt to block the Red Horse's passage if the Horse were in their scope. 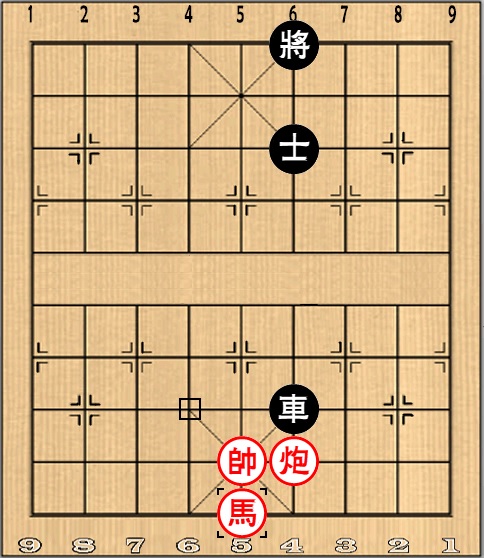 The Horse would now be successful in moving to the other flank to attack.

As can be seen, the Red Cannon still had the Black King, Advisor, and Chariot pinned to the same file.

Red would move his Horse to the other flank and use a similar tactic shown earlier to advance his Cannon and decrease the space that the Black Chariot can move.

The Red Cannon is advanced. As can be seen, the Black Chariot can only retreat R6-2. The Black King Cannot move K6+1, or Black would lose his Chariot to the H2+3 check by the Red Horse! 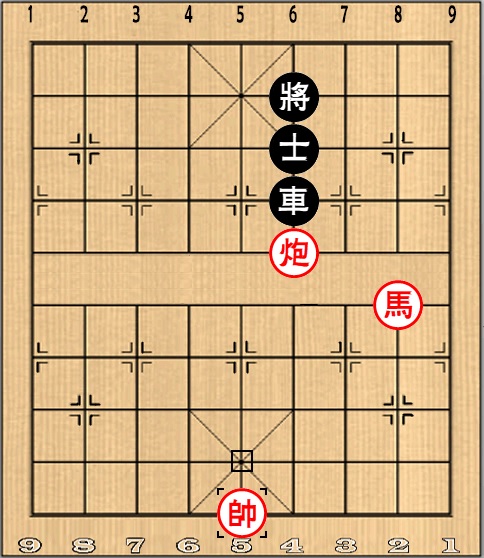 H2+3 would also be viable. This variation would be presented with the suffix 'a' at the end of each move.

Red would now be threatening to checkmate with C1+4. Black cannot thwart this threat with R6=9, or Red would deliver a check with H2-3 to capture the Black Chariot.

If Black advanced his King K5+1, Red would still capture the Black Chariot with an H2-3 check.

Black would lose the Chariot and the game to this check by the Red Horse. 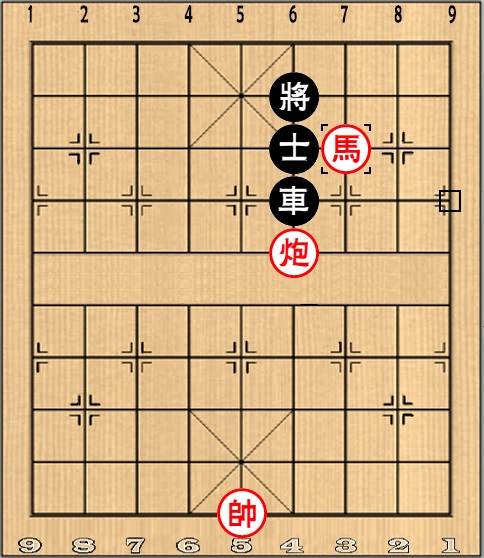 Although this puzzle is about 800 years old, it does show that there was already a certain level of tactical skill back in Wen Tianxiang's time.

This endgame puzzle would also be a lovely example of using the tactic of a pin in the earlier stages of the game. The attack by Red would also demonstrate the concept of space. Finally, the Red Horse might also show how powerful it can be in the endgame stages, where there is less material to hinder its progression.

Wen Tianxiang has been one of the most revered heroes in China for centuries. He also left future generations much valuable information about Xiangqi during his time. From the endgame compositions to his poems about Xiangqi, we can see that Xiangqi had already taken on its current form. Xiangqi also was well established, so much so that there was a grading system of players. Finally, Wen Tianxiang's passages also proved that there was much Xiangqi activity during towards the end of the 13th century.

There is still more information about Wen Tianxiang and Xiangqi, which are beyond the scope of this article. The late modern-day historian Zhu Nanxian wrote about the ink slab that Wen Tianxiang had and its implications for Xiangqi. There were also endgame compositions that Wen Tianxiang created, which were mentioned in the history books. Unfortunately, all were lost except for the puzzle given above.

Interestingly, the author has often wondered if Marco Polo encountered Xiangqi during his travels in China. It is believed that Marco Polo traveled through the Sile Road between 1271-1295 AD, which would be around the time when the Song Dynasty fell and when the Jin Dynasty was established. Unfortunately, the author has not been able to find any information in Marco Polo's travels regarding Xiangqi.