GM Lin Ye was born in Chengdu City, Szechuan Province in 1963. She started learning Xiangqi at a later age as compared to other 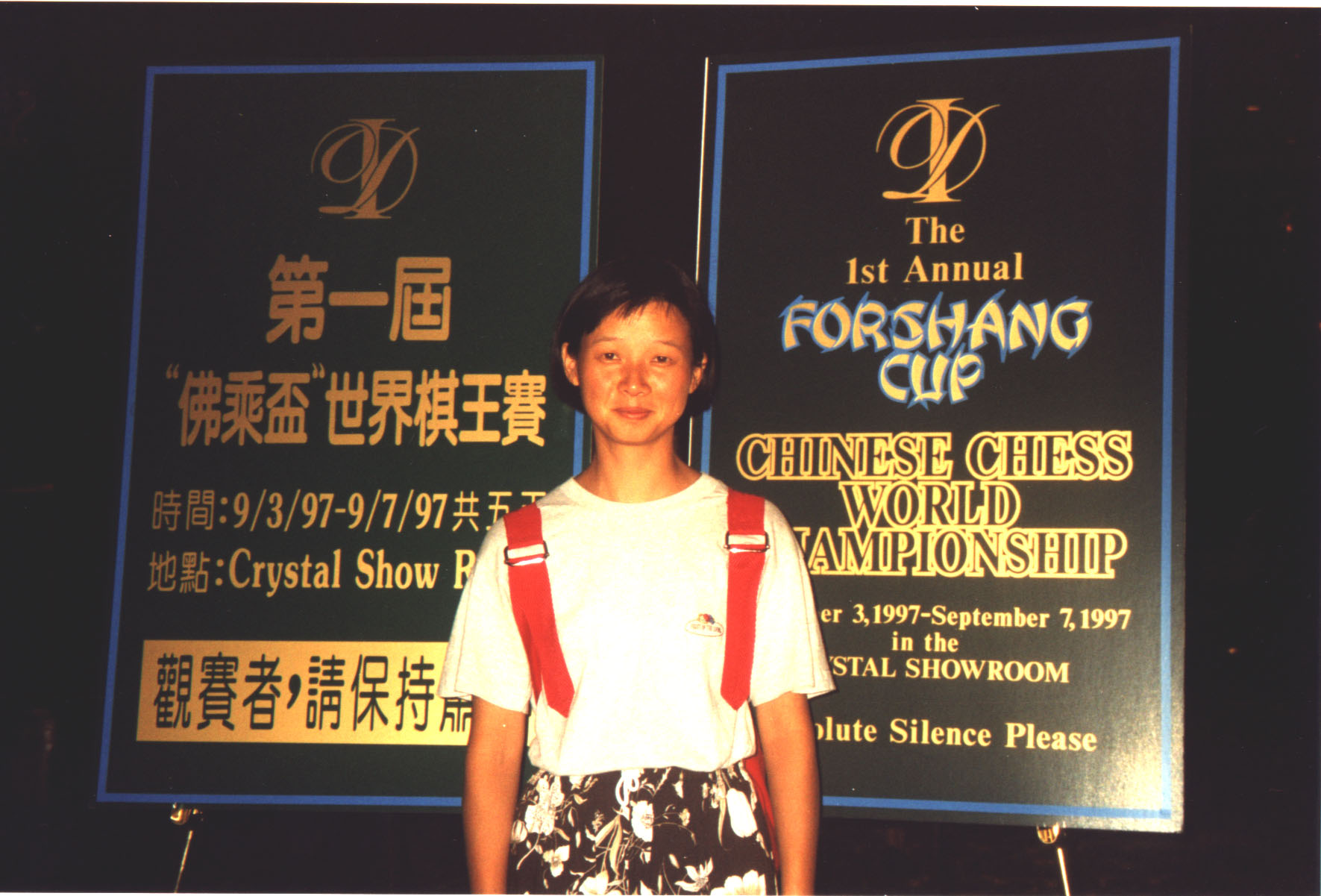 grandmasters, at the age of 15. But, under the tutelage of another well known Xiangqi player, Chen Deyuan 陈德元, her level of play improved by leaps and bounds. Within a short span of 3 years, she made it to the Szechuan provincial team to be guided by Xiangqi master Chen Xinquan陈新全. It is remarkable at the speed of her improvement, according to the references listed. In 1977, she started learning the game seriously, and only one year later, she took part in the National Youth Xiangqi Championships and was awarded the 2nd runner up. And she did not stop there. By 1981, she became the 4th ever National Xiangqi Female Individual’s Champion, without incurring a loss! Although she never won the tournament again, she was in the top 3 spots for 3 times ( 1979,1981 and 1982), and was awarded a placing in the top 6 positions another 5 times. Another highlight of her career in China was winning the National Xiangqi Female Team Championships in 1984, where she was the most important board on the Szechuan Team. The Szechuan team came in the top 6 positions many times. Indeed, Lin Ye not only managed to break into the spotlight in the Xiangqi world, she also managed to influence the Xiangqi in Szechuan Province. Master Jiang Quansheng recalled after Lin Ye became the women’s champion, more people played Xiangqi in Szechuan. And suddenly there was fresh blood to succeed the older Xiangqi players.

There are basically 4 major culinary discliplines in China, Shanghai, Guangdong, Szechuan and Beijing (if I remember correctly). And amongst the four, Szechuan is known for its spicy feel. One of its most well known foods is its hotpot, called 麻辣火锅 in Chinese. Not only is it hot (very hot in fact), it also has the ability to numb your taste buds. A fiery dish indeed, just like Lin Ye's play. She is very well known for her ability to play in complicated situations, looking for tiny bits of advantage before she kills her opponents. Just like the Szechuan hotpot... She announced her retirement in China in 1988 but still represented Chengdu City as the first board in the 1991 National Xiangqi Female Team Championships and was instrumental in their final result, 4th place. The reason for her retirement was to allow her to pursue her studies where she majored in English (foreign language) at the Szechuan University.

Lin’s achievements did not end here. Nor were they limited to China. In 1993, Lin went to Italy to further her studies. She would not give up Xiangqi and continued to take part in the European Xiangqi Championships, in the MALE section. And yes, she has dominated the male sections too. Lin was also very active in Italy. She has been the 4 times Italian champion (in male competition: 1993, 1999, 2000, 2002) and got the first place (together with He ZhiMin 何志敏 ) in the individual European male championship held in Italy in 1995 – the first place was assigned to He ZhiMin 何志敏 due to his slightly better bucholtz.

Another highlight of Lin’s career was becoming the World Champion in 1997 when the tournament was held in Hong Kong. There was much drama in that tournament. Lin’s final results were dependent on another game played between China’s Gao Yiping and Taipei’s Liu Hongxiu. It was an upset when the favourite Gao lost, thereby ensuring the victory to Lin. It was said that Lin’s husband jumped onto a table, dancing and cheering for Lin. Lin is currently married to Mr Agostino Guberti, who happens to be the president of the Chinese Chess Association in Italy. Mr Agostino is also a computer programmer and had made a Xiangqi program called “ Linye”.

Reference:
1. <<象棋女子特级大师 名局精解>> by 徐家亮
2. http://www.wfhxqy.com/bbs/showtopic-5230.aspx
In Chinese, article introducing all the female greats of Xiangqi. It is interesting to note that the introductions are exactly the same as the ones found in the book I bought..(reference 1).
In Chinese, http://ks.cn.yahoo.com/question/1406071600652.html an article dedicated to Lin Ye and her husband.
In Chinese, Szechuan Xiangqi Master speaks about Lin Ye’s influence on Xiangqi in Szechuan Province. http://crhb.xxking.com/News/ArticleShow.asp?ArticleID=11441