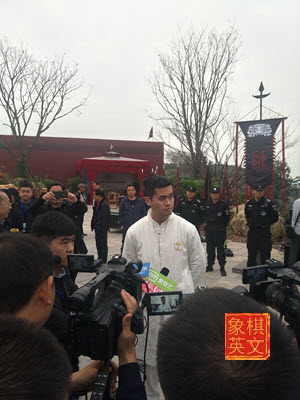 Wang Tianyi (王天一 wáng tiān yī) has been one of the biggest achievers in professional Xiangqi in China at the turn of the century. He is the current A native of Beijing; he was born in 1989 and started learning the game when he was seven.

His talent for the game was unmistakable. When he was just sixteen years old, he won a tournament for his age group and was promoted to Xiangqi master. This was but one of the many national tournaments that he won. He was selected to represent China in international competition, where he won the 2004 Youth Division of the Asian Cup. Wang continued his winning ways and soon caught the eye of the Beijing team, which absorbed him when he was studying at Beijing University in 2011. Beijing would win the team championships in the A league in 2012, and Wang was the player with the highest win rate at 12W9D1L. His winning ways caught the eye of various groups in China.

However, the defining moment in Wang's career was in 2012 when he won the National Individuals Championships with a 5W6D undefeated record to become the 16th King of Xiangqi in China. He was unable to defend his title the next year but was a constant threat in the tournament.

For his achievements, he was selected to represent China and promptly won the 2013 World Xiangqi Championships. His winning ways caught the eye of various groups in China. Moreover, in 2014, he switched teams and rendered his services to Inner Mongolia for the A league and promptly became the champion team. In the National Team Competition, Wang became part of the Sichuan dream team with Zheng Weitong and was the champion team.

2015 was another fruitful year for Wang, where he managed to win nine tournaments, allowing his annual income to break the two million yuan mark. By this time, he had rendered his services to Guangxi for the A-League. Again, he was the player with the highest winning percentage, which was a staggering 84% win rate, and the Guangxi team were champions. However, 2015 was not entirely perfect for Wang. He was upset in the National Individual Championships by the same player who also retired Grandmaster Jiang Chuan and was not able to make it to the round of 32.

GM Wang won the Chinese National Xiangqi Individual Championships again in 2017, earning him the ticket to participate in the Chu River and Han Border King of Xiangqi Tournament. He bested his opponent, GM Xu Chao, who had defeated him months earlier to claim the 2018 title. It was sweet revenge, made sweeter with a one million yuan purse in prize money.

It was also in 2017 that GM Wang rendered his services to the Hangzhou team, making the team an immediate candidate in various team tournaments.

To date, Wang Tianyi is perhaps the most feared Xiangqi player globally and there will be more records that await to be broken.

In the past few years, the internet was stunned to learn that Wang had tied the knot and even had a daughter. (2)

There are tons of videos of GM Wang on Youtube. However, there are only a handful in English. Given below is a long video which shows GM Wang doing battle. There are no English subtitles.