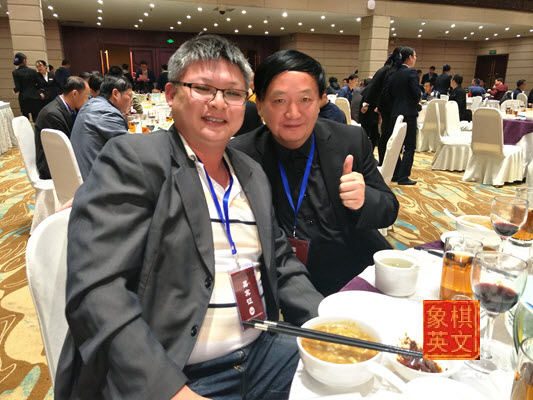 Xu Tianhong was born in Jiangsu Province in China in 1960. When he was very young, he came under the influence of his father and uncles, who were good Xiangqi players themselves. Xu learnt the game quickly when he was very young. He won his first championship when he was 15 when he represented Tai Zhou City泰州市 to take part in the Yangzhou district Xiangqi championships. Having tasted victory, he was eager for more. He worked hard, and in 1977, he came in runner up in the Chinese National Xiangqi Youth Championships. He was accepted by the Jiangsu team. In 1981, he was the third board on the Jiangsu team when they came in 4th place in the Chinese National Xiangqi Team Championships and his personal contribution was 17 points. It was quite a good result for a 21 year old then. Working even harder, he came in 8th place in the 1984 Chinese National Xiangqi Singles Championship and obtained the title of Xiangqi Master. He upped his tournament placings the following year by coming in 4th, beating GM Li Laiqun and other masters in their prime. 1986 was also a fruitful year. He became the runner up in the same competition. But his best performance came in 1989 , when he became the 7th Champion of all time with a 7W-6D record. He was awarded the title of Grandmaster the same year. Xu represented China in the 1993 World Xiangqi Team Championships and also won the singles event. Xu was also the key player for the Jiangsu team when they won the Chinese National Xiangqi Championships in 1996. Since then, Xu has still been very active in competitions and has served as Xiangqi coach to various different organization.

The following video would show a video of the grandmaster in style. The English subtitles are 'interesting'.