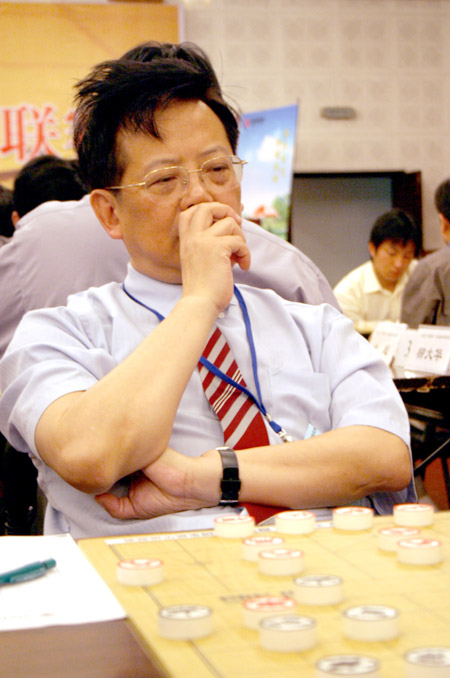 Chinese saying: 前无古人, 后无来者 (qián wú gǔ rén hòu wú lái zhě). Translated literally, it means that there have been no predecessors of similar accomplishments, and it is unlikely that anybody from future generations will have similar achievements. Grandmaster Hu Ronghua (胡荣华)’s achievements in Xiangqi demonstrate so. He is legendary, a man in a class of his own. And many consider him to be the best Xiangqi player of all time.

Born in Shanghai in 1945, GM Hu won the national championship in China at the tender age of 15. Skeptics considered the feat as a stroke of luck, but how wrong were they! He continued to win 10 consecutive times from 1960-1979 before GM Liu Dahua(柳大华) dethroned him. There were only 10 Chinese National Xiangqi Singles Competitions held in this period due to the cultural revolution whereby the tournament was stopped from 1967 to 1973. It was also stopped in 1976 due to the death of Mao Zedong. He won the prestigious event again in 1983 and1985. And when people thought that he was past his prime, he won the event again in 1997 and 2000, thus becoming both the youngest (15years of age) and the oldest (55years of age) to have won the competition. And he was runner up 4 times and second runner up 2 times from 1982-1992. He has also won the Five Rams Cup 5 times, with a consecutive 3 year run as champion, thus preserving the Cup in Shanghai. The Five Rams Cup is perhaps the most difficult Xiangqi tournament in the world, whereby only Grandmasters are eligible.

In group tournaments, he has lead Shanghai to victory countless of times. In the 60-70’s, he and GM Yang Guanlin dominated the Xiangqi scene. Their battles were legendary and he holds the winning record against Yang. His games have been and are still studied meticulously all. When the 1980’s started, the new influx of talent and players made him loosen his vicehold on the Xiangqi scene, but he was still a force to be reckoned with. Many consider him to have dominated the Xiangqi scene for over 40 years.

His style of play has been described as very well balanced. He does not waste too much time per move during competition but would often surprise his opponents with his in-depth meticulous calculations. He often surprises his opponents with unorthodox openings, brilliant mid-game maneuvers and excellent end-game technique. For his achievements, he was bestowed the title of Grandmaster in 1982.

Upon inception of the Asian Xiangqi Federation in 1988, he was also bestowed the title of International Grandmaster of Chinese Chess. Outside of the competition arena, his contributions to Xiangqi are also tremendous. Back in the 50’s and 60’s, most Xiangqi openings were limited to the Central Cannon vs Screen Horse variations or ipsilateral cannon openings.

He single-handedly revolutionized the elephant openings, made the Sandwiched Horse Defense (反宫马) another contender to defend against the central cannon. Many other grandmasters or Xq masters both in China and outside of China have also come under his tutelage.It is said that GM Xie Jing was his last disciple.

He is also well known for playing blind chess, that is, playing Xiangqi without looking at the board from memory alone. His personal record was 1 vs 14 players. Since then his record has been broking by GM Liu Dahua and GM Jiang Chuan. Currently, he is the vice-president of the Chinese National Xiangqi Federation, vice-chairman of the Asian Xiangqi Federation, and Chairman of the Shanghai Chess Consortium.

The legendary grandmaster has also authored many books, like 《反宫马专辑》 , 《胡荣华象棋自战解说》 , 《胡荣华飞象百局》… and co-authored many more. It is impossible to list the greatness of this superhuman being in such a short essay.