In the traditional system used to record games, the files are numbered 1-9 from right to left for each player separately. As you look at the diagrams, red’s 9 file and black’s 1 file are at your left. The ranks are not numbered. Moves are indicated in the following syntax.

(1) Name of piece;
(2) Original file;
(3) Direction (“advances” jin, “retreats” tui, or “traverses” ping);
(4) Destination file or Distance When two pieces of the same kind occupy a file, the number of the original file is replaced by the word “front” qian or “rear” hou, depending on the position of the moving piece relative to the player who owns it. (There are ways of dealing with more than two soldiers on a file, but this is such a rare situation that I won’t go into them here.) The final element is always the destination file for the mandarin, elephant, or horse, and for other pieces when they are “traversing,” i.e. moving laterally. Otherwise it is the number of points directly forward or backward that the piece moves.

In the shorthand or international form of this notation, the above moves would appear as follows:

For more examples, see the notation of the sample game above on this page.
( Jim: Unfortunately I have not been able to use the program that Peter used. The other examples on this website would suffice.)

In some game records, lower-case letters are used to identify the black pieces. The following scan shows the beginning of a game, from a collection published in mainland China in 1958. Black is at the bottom of the diagram and moves first. Black’s moves are given entirely in Chinese numerals, while Arabic numerals are used for red. (This convention probably originated in the traditional top-to-bottom, right-to-left system of writing, where the moves of the two players would not have been in separate columns.) Note the character for “rear” identifying the cannon in black’s ninth move. The annotations are in numbered footnotes, and the character for “diagram” appears at the end of the tenth move. 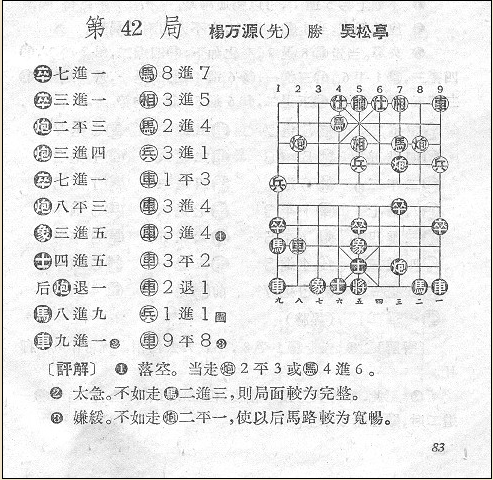 Other systems of notation have been devised by Western writers (including me), but variations of the traditional system are used almost everywhere online and are easy to follow once you get used to the file numbering.