Players take alternate turns. In each turn, a player must make a single move with a single piece. If a piece ends its move on a point occupied by an enemy piece, that piece is captured and permanently removed from play.
The object of the game is to capture the enemy general. The game is won as soon as one player can make no move that prevents capture of his general. This is checkmate. Stalemate, where one player has no legal move but is not in check, is a win for the last player to move.
It is illegal to make any move that exposes your general to immediate capture. This is called moving into check.
It is illegal to avoid defeat or attempt to force a draw by repeating the same series of moves over and over. In particular, perpetual check is not allowed, and the onus is on the attacker to vary his move.

As can be seen from the diagram, the board is very different from the one used for Western chess. The pieces are played on the lines, not on the squares; the playing field is therefore a grid of nine files (numbered here for traditional game notation) and ten ranks, making it 40 percent larger than the Western chessboard. 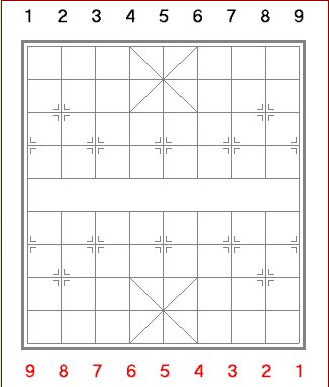 The markings on the board have the following significance:

Footnote by Jim: The "seven stars" are called 盤星 in Chinese and a better translation would be simply boardstar or boardstars for plural form. Click here for the relevant material on my site.

The pieces are discs of wood, plastic, or some other material, each identified by a Chinese ideogram in the team colours, typically black (sometimes another dark colour) and red. The names of some of the pieces differ on the two sides. The character on the red elephant, for example, actually means minister or augur. However, discussions of the game in English invariably assign the same names to the pieces on both sides. There is also some variation in the form of the characters, especially in older sets. The names of the pieces given in parentheses below are the official English terms set by the World Xiangqi Federation, where these differ from the names used in my book and in some previous literature. I have continued to use the unofficial names partly from inertia and partly because I think they do greater honor to the distinct tradition of the Chinese game. However, I have by necessity used the standard abbreviations in notation. Note that to avoid confusion with the cannon, the chariot is abbreviated as R, although the piece is not officially called a rook by the WXF. 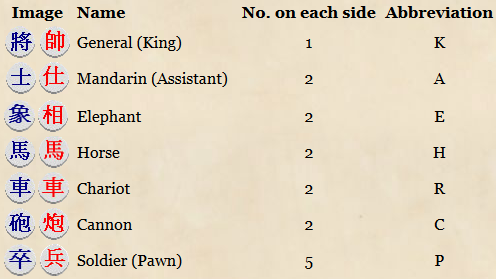 Webmaster's note: Click here for the relevant material on Xqinenglish.

Moves of the Pieces

Except for the cannon, the pieces move when capturing just as they do when not capturing.

General. One point in any non-diagonal direct0on. Cannot move outside the castle. In addition, the general has the theoretical power of striking along an open file to capture the opposing general. Therefore it is illegal to make any move that leaves your own general on an open file opposite the opposing general, because to do so would be to move into check. Footnote by Jim: The King is the official term used now.

Mandarin. One point in any diagonal direction. Cannot move outside the castle. Footnote by Jim: The Advisor is the official term used now.

Elephant. Two points in any diagonal direction. It must move two points, and cannot leap another piece of either colour. Cannot cross the river. An elephant can thus reach only seven points on the board.

Horse. One point in any non-diagonal direction, followed by one point in a diagonal direction, so that it ends two points away from where it started. This is similar to the knight’s move in Western chess, except that the move is blocked by any piece occupying the point at the elbow of the move. Hence it is important to remember that the non-diagonal part of the move comes first.

Chariot. Any number of points in any non-diagonal direction. Cannot leap. This is just like the rook’s move in Western chess.

Cannon. When not capturing, moves just like the chariot. When capturing, must leap a single piece of either colour before proceeding to the point occupied by the target piece. This intervening piece is called a screen. (Footnote by Jim: The Cannon Mount is used instead of the screen.)

Soldier. One point straight forward. After it reaches the opposite river bank, can move one point forward or directly sideways. Never moves diagonally or backward. No further promotion is gained when a soldier reaches the farthest rank of the board. Footnote by Jim: Pawn is the official term used now.