Xiangqi has often been described as a highly tactical game. The only way to play Xiangqi well is to have a sound understanding of the tactics that can be employed to realize a strategy. Depending on the strategy, different tactics can be utilized to achieve a particular goal. But, how many types of tactics are there in Xiangqi (Chinese Chess)? What are their characteristics? How do we learn them?

The article is presented as follows:

Overview of the game

Attacks and defense form the very nature of Xiangqi. As a game progresses, one Color will attack while the other will be forced to defend. Sometimes, a mix of both states can be seen, which is also the natural course of things. For example, a player might be defending from an enemy attack when the enemy exposes a weak line that can be exploited for an attack. The player might choose to switch from defending to attacking that weakness.

To break the initial equilibrium, both colors will fight for the initiative (争先zhēng xiān). Having the initiative will mean that you have the power to make threats. The enemy must respond to these threats or face greater consequences. As the game progresses, the situation on the board will become one of the scenarios listed below:

Getting the upper hand

To break the equilibrium and make the situation on the board favorable, a player will try to do one or a combination of the following:

A player will decide his course of action, which will be the strategy he adopts to guide his game. He then sets specific goals and determines which tactics he will use to achieve these goals.

1a : the science and art of disposing and maneuvering forces in combat

b : the art or skill of employing available means to accomplish an end

2: a system or mode of procedure

3 : the study of the grammatical relations within a language including morphology and syntax

There is another more straightforward definition for kids from the same webpage:

1 : the science and art of arranging and moving troops or warships for best use

2 : a system or method for reaching a goal

Hint: Tactics can be used as a singular or a plural in writing and speaking.

Definitions 1a, 1b, and 2 will apply to Xiangqi. If applied to Xiangqi, the author believes the following:

An analogy would be the one-two-three combination punch that a boxer uses to knock out the opponent. It can also be the set plays or drills that football (soccer), American Football, basketball, et cetera players go through to make a play.

The reader is advised to think about the purpose and what a tactic can do in various situations.

The Confusing Classifications of Xiangqi tactics

Tactics can achieve many different things at the same time. For example, advancing a Horse may threaten an enemy Horse, set up a potential kill, force a piece out of the way, make the enemy defense focus on it where it can act as a decoy et cetera. Because they are so versatile and powerful, the classification of Xiangqi tactics is complicated and can be very complex to the beginner.

Most beginner books classify the different tactics based on what they do and offer simple examples of chosen tactics. More advanced books try to combine the tactics in games with the tactics discussed in ancient military strategy books like the Thirty-Six Strategems, Sun Zi's Art of War, the Tai Kung's Six Secret Teachings, et cetera.

Then, some books discuss the different tactics based on analyses of different endgame puzzles, matches, et cetera. Many books focus on the tactics that a specific combination can achieve with very practical examples.

The tactics that can be applied will also differ based on the phase of the game that it will be put to use. For example, the lack of material in the endgame phase would mean that tactics used to pin enemy material will perhaps not be as crucial as in the midgame or opening phase.

In summary, the classification of Xiangqi tactics is quite complicated. 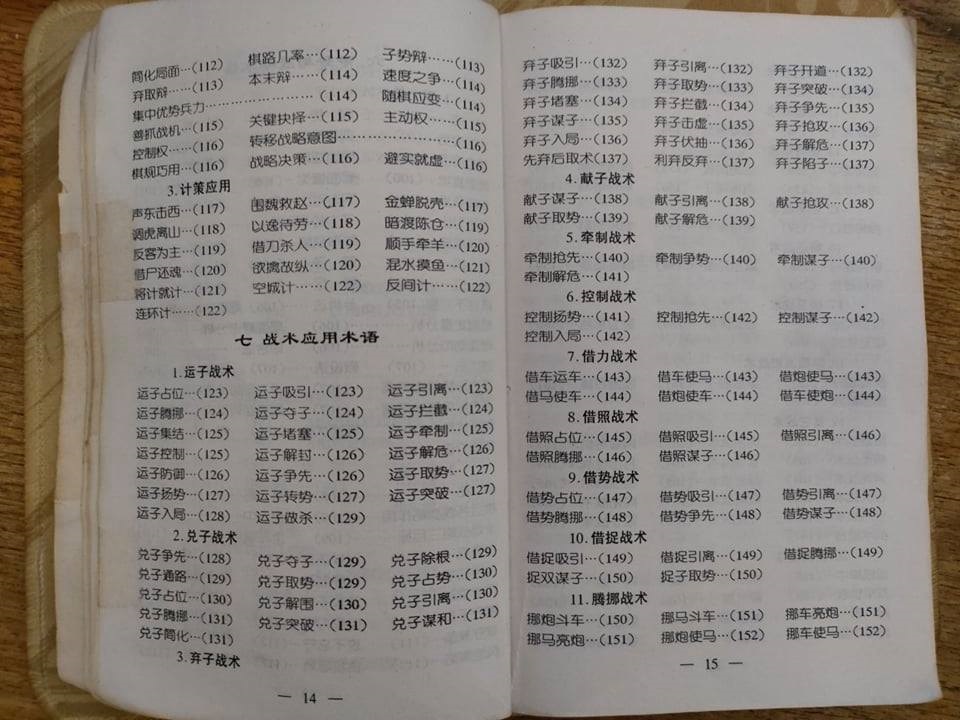 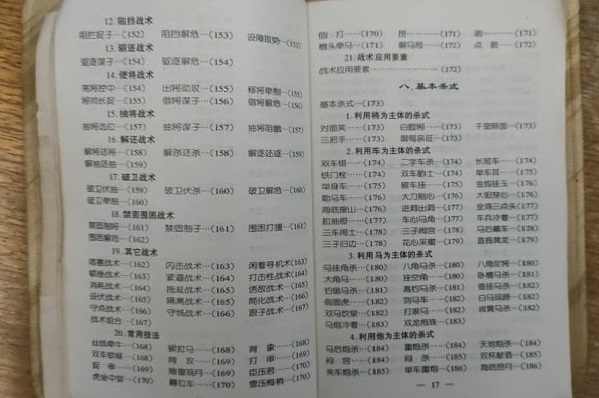 Eight Factors to consider when choosing the tactics

What do we need to consider when selecting tactics or tactical combinations to use? According to Wang Guilong, there are eight factors to consider. (2 页 172)

What is your goal? What do you hope your chosen tactic(s) will achieve?

Tactics should never be chosen such that once they are carried out, it is impossible to continue with the game. Instead, tactics should allow other plans or tactics to be continued, as determined by the strategy.

The chosen tactics should be beneficial to the entire game.

Tactics are a means to achieve a goal. Achieving the goal should be the top priority, not any other gains that might come in the way.

Opportunities to make gains in the game appear in the blink of an eye. When choosing a tactic, it is also essential to consider whether it can be applied to the current situation.

The tactics chosen should be as versatile as possible such that they will allow the player to change his tactics or game plan according to the situation on the board.

Applied tactics should be made with the utmost precision and accuracy. Any error in judgment can result in irreversible damages. For example, neglecting to take into consideration a potential defensive measure will allow the enemy to escape.

The tactics should be practical. Hoping that the enemy will miss something is naïve. Efficiency is also required. The ideal tactic will be able to achieve its goal with high efficiency.

After going through several beginner books on Xiangqi, the author has organized a list of tactics that they presented to the reader. The author regards this list as a basic syllabus for beginners to learn the game. The tactics that were recommended are as follows: (3) (4) (5)

These tactics will be discussed in separate sections and articles devoted to them. In the author's own experience, these tactics can be grouped into three major factors: Material/Position/Space. Correct application of the tactics will allow the player to profit from material, position, or space.

Grandmaster Liu Dianzhong’s book grouped the tactics into five different categories: capturing material, trading material, maneuvering material, sacrificing material, and others. The author finds his presentation the easiest to comprehend and will follow his recommendations.

As this series of articles introduces basic Xiangqi tactics to the non-Chinese speaking people in the world, the author will introduce the various basic tactics and give simple examples.

Although essential, the topic of basic Xiangqi tactics is not easy to present. More often than not, they have to be learned via case-by-case examples.

The author has made a series of videos based on a free e-book that can be found on the World Xiangqi Federation Website, which introduces basic Xiangqi tactics for the studious reader. The videos started in 2019 and are still ongoing. The playlist can be reached by clicking on the link.

For people who know Chinese and are fans of both International Chess and Xiangqi, there is an article written by the Webmaster of xqbase.com that compared the differences in the tactics used in both forms of chess. The article can be accessed by clicking on the link.