The Value of the Pieces in Xiangqi (Chinese Chess)

Author: Jim Png
This article first appeared on Xiangqi.com. on 22nd of Jan 2021.

In this article, the author will present a general scheme of valuing the pieces, introducing a few concepts, and showing what Xiangqi's books have to say.

The article will be divided into the following sections:

Why understanding the value of pieces is important

Xiangqi is a game modeled after actual warfare. As in war, there will be casualties. Minimizing the loss of material while maximizing enemy material loss would tip the scales in your favor. While the ultimate goal is to capture the enemy king in Xiangqi, you would have to have enough material to fend off enemy attacks and have enough pieces to launch an attack to capture the enemy king.

Unlike Weiqi, where there is no differentiation of the pieces, there are seven different types of Xiangqi pieces with different abilities. The uniqueness of each Xiangqi piece would add another dimension to the evaluation of the situation.

As a general rule of thumb, the team with more men would usually win in a simple fight. Strength in numbers is a concept that everyone should appreciate.

However, in more complicated situations like wars between countries, the number of people in an army is not the only factor to consider. Otherwise, the country with the biggest army would theoretically be the strongest. Instead, an army's attacking and defensive potential is also graded on their ability to attack and defend using weapons and defensive systems, et cetera. The QUALITY of the army's attacking and defensive capabilities would become significant and could offset any disadvantage brought about by a lack in numbers. The quality of the pieces on the board can often be more important than having more men.

For example, returning to the analogy of a street fight, if some of the people on one team were experienced kung-fu experts or MMA fighters, they would have a better chance of winning against ordinary folk despite being reasonably outnumbered. Likewise, a small group of people with weapons might fare better against a large group of people fighting with their bare hands. It would be similar to checkers, where a 'crowned' piece would be able to take out a considerable number of ordinary men. Another example would be when a top salesman in a company may be responsible for the vast majority of the sales compared to his colleagues.

The general concept of the piece value would be similar to understanding the strength of an army. It would be one way to reasonably judge your army's attacking and defensive capabilities against the enemy.

There are seven different types of Xiangqi pieces: the King, Chariot, Horse, Cannon, Pawn, Advisor, and Elephant. As with the articles that the author has written, the pieces' names follow the official recommendations of the World Xiangqi Federation (WXF). The latest and official rules of the WXF are called the World Xiangqi Rules, which were published in 2018. (1)

The following table is a rough introduction to the values of the Xiangqi pieces, as recommended in many different books. (2) (3)

A few things to take note of:

a) To compare the strength of each individual Xiangqi piece, a pawn that has not crossed the river has been used, by default, as the standard by which other Xiangqi pieces are compared.

b) The arbitrary values given above are a rough introduction to a piece's value at best. They DO NOT TAKE INTO CONSIDERATION other factors when evaluating the TRUE VALUE of a piece.

The following table can be found on Wikipedia and has been used on Xiangqi.com. (4)

Approximate relative values of the pieces

True Value of a piece

As mentioned earlier, the general concept of the piece value would be similar to understanding an army's strength. However, there are more factors to consider when assessing the TRUE strength or value of a Xiangqi piece. The TRUE VALUE OF A PIECE can only be determined by evaluating its effect on a particular situation.

Assessing the true strength of a Xiangqi piece is a much more complicated process.

In his small lexicon, Wang Guilong introduced the concept '棋子位置价值论' which is translated as 'the concept of defining the value of a piece by its position.' He felt that the true strength could only be assessed if that piece were considered from the entirety of the board's situation. There were three factors that he stressed:  (5 页 34)

The following example is given to explain how these concepts could affect the value of a piece.

The following endgame composition was the 42nd board of Volume 1 of the Elegant Pastime Manual, an ancient manual written in the Ming Dynasty. It was called 參辰卯酉 (Hanyu Pinyin shēn chén mǎo yǒu). The author has translated it as The Shen and Chen Stars in the English edition of the ancient that he has published. It is also one of the author's favorite puzzles of all time. 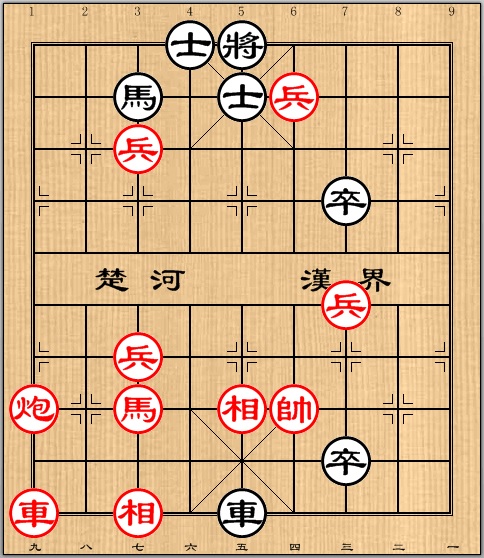 A simple analysis would show that Black was about to checkmate with R5=6. Although Red had more material in terms of the extra Cannon and Pawns, the Black Chariot would be more deadly and worth more than its Red counterpart at this time as the Red Chariot was closed and not mobile.

C9+7 would be a check that the Black Horse must resolve. After H3-1, the Red Pawn on the 7th file would now have the Black Horse cornered, thus applying an effective bind.

Another brilliant move! The threat of Black's R5=6 checkmate would be neutralized as the Red Chariot was sacrificed. The Black Chariot cannot retreat, or the Red Horse would capture it. It must capture the Red Chariot. 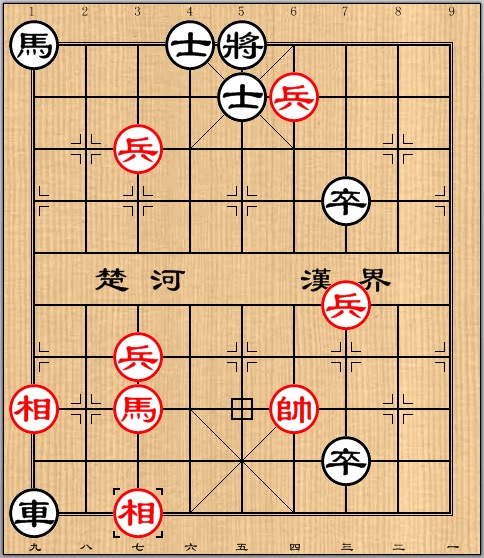 Black's Chariot would now be imprisoned by the two Red Elephants and the Red Horse. The Black Pawn on Red's throat rank cannot move to the other side to free the Chariot as the Red king would have prevented that.

Red would win by pushing the 7th file pawn across the river and then capturing the remaining Black's Pawn. Red would then advance his final two Red Pawns across the river, where it would be, in effect, a 3p vs. 2a endgame situation. Red would go on to win easily.

As can be seen, just after two plies, the value of the Black Chariot would have gone from a valuable piece to becoming next to worthless. It would be an injustice to assess the value of the pieces using the table given above, for they would not reflect the TRUE VALUE of a piece.

Getting back to the concepts of mobility, balance, and effectiveness, as mentioned above, we can learn a few examples from the puzzle. The mobility of a piece would affect its actual value on the board. A closed or trapped Chariot would be worth next to nothing, as can be seen from the Black Chariot's fate.

Another essential factor would be the position of a particular piece. The Black Chariot and Horse were in a terrible place at the end of the puzzle where they could not move at all. In contrast, despite having the lowest value in the table, the humble Red Pawns were more EFFECTIVE than the Black Chariot and Horse. After all the Red Pawns had crossed the river, their collective value would be eight points, which was less than the Black Chariot alone. Yet, the Red Pawns were the game-changers. The position of the Red pieces also showed outstanding balance in the formation of the formation formed.

Any Xiangqi piece on the board that is capable of delivering a checkmate or assist in doing so would DEFINITELY BE VALUABLE THAN THEIR ASSIGNED 'ARBITRARY' VALUES. Therefore, the Red Pawns that were free to move would be worth much more than the assigned values given in the table.

Therefore, the true worth or value of a Xiangqi piece has to be determined by many other factors.

Xiangqi theory flourished in the last century. When determining the value of the pieces, another concept was that the value of a particular piece fluctuated in different game phases.

The late International Xiangqi Arbiter Zhu Baowei had a table in his book that perhaps best describes this concept. (2 页 20)

The following is a translation of the table from his book.

The value of the Pawn has to be discussed separately.

In the Opening Phase, the Pawns of the opposing colors would face each other in the same file. Zhu gave the arbitrary value of 1 point.

Again, the values that Zhu assigned are arbitrary. They should be appreciated and examined under the actual conditions of the situation on the board.

Some basic knowledge to know

In his book, Zhu Baowei also mentioned several general concepts that are generally taught to beginners. These are some very general guidelines that are meant to help the absolute beginner have a rough idea of things' value. (2 页 21)

a) A Chariot is generally believed to be worth more than two Horses, two Cannons, or a combination of one Horse and one Cannon. (1r=2h=2c=1h1c).

c) Combinations of two Horses, two Cannons, or a Horse-Cannon combination are generally believed to be about the same in value. (2h = 2c = 1h1c)

e) One Horse is worth about two Advisors, or two Elephants or two Pawns that have crossed the river. The same goes with the value of one Cannon. (1h=1c=2a=2e=2p).

Endgame Theory and the Value of the pieces

These concepts should be taken with a grain of salt as the player becomes more advanced.

For example, a Chariot is generally believed to be equal in strength to a full guard (Two Advisors and Two Elephants). If optimal conditions were given to both colors, a Full Guard would be able to force a draw.

However, a combination of a Horse and Cannon would be a book win against a Full Guard, despite claiming that a Horse-Cannon combination was roughly equal to a chariot earlier!

There are many more such examples based on endgame theory

Assessment of the pieces' strength on the board is one key factor to address when analyzing the situation on the board. It is also one of the main ways that a newcomer to Xiangqi tries to understand the game.

However, despite attempts to quantify a particular piece's value, its true strength or value may never be accurately described. The reason for this is that there are so many other factors to be considered.

Therefore, while beginners do need to have a rough idea of how much a Xiangqi piece might be worth, it would be more important to consider what it can do in a particular position or situation.

In fact, the more advanced books on Xiangqi seldom, if ever, mention the value of the pieces, much less the arbitrary values. Instead, analysis of the position would focus on formations, tactical combination, et cetera.

In the author's humble opinion, it would be more important to know how a piece could function in a particular situation and what possible combinations could result in synergy than merely assessing the situation based on material value alone.

"Nowadays people know the price of everything and the value of nothing." – Oscar Wilde