The article would be presented based on the following topics:

For the visitors who prefer watching videos, the Webmaster has also made a short video presentation that has been uploaded to Youtube, as shown below.

History of the Xiangqi Chessboard and its Symbolism

The ancient Chinese have long described Xiangqi as a game of miniature warfare, and the Xiangqi Chessboard would represent the battleground. The origins of the Xiangqi Chessboard cannot be ascertained, but many people believe that it represented a battleground that was located at Xingyang, He-nan Province, China. There was a canal called the Hong Gou. Click here for the link to Google Maps showing the place.

It was during the Chu-Han Contention (楚汉战争Chǔ Hàn Zhàn zhēng, 206-202 BC) where there was a standoff between Liu Bang (刘邦 Liú Bāng, c. 256 BC- 195 BC) and Xiang Yu (项羽 Xiàng Yǔ). Neither side could get the best of each other, and a treaty called the Treaty of the Hong Canal was signed. Later Liu Bang, the initial underdog, would manage to break the deadlock and defeat Xiang Yu, forcing Xiang Yu to commit suicide. Liu Bang would then establish the mighty Han Dynasty. But he would not have succeeded if he did not have help from able generals like Han Xin, Xiao He, and Zhang Liang. (1) (2) (3)

An interesting fact to know would be that Liu Bang was represented by the color Red and the color of Xiang Yu’s army was Black. There is much more symbolism that would be beyond the scope of this article.

An interesting fact is that in many Xiangqi boards, the Chinese characters 楚河汉界 (Chǔ hé Hàn jiè) can be found. The Chinese verse would refer to the standoff at Xingyang, as mentioned above.

However, there is a documentary that was done by CCTV in China, which discussed a Xiangqi board from 1108AD (大观二年). The inscription of 楚河汉界 could be seen clearly from the video. The video cannot be found on Youtube but it can be viewed at the following link .

There is another documentary which touches on the subject nicely. It has been embedded below.

Since the Xiangqi chessboard is the battleground, it would be important to know the ‘geography’ of the chessboard. The terms are crucial because they are used in Xiangqi notation, which has its own system and is completely different from the algebraic notation used in International Chess.

The Xiangqi chess board is made up of nine vertical lines and ten horizontal lines. The pieces are played on the lines and not in the squares.

There are different names to the files. The English names given below were based on a short glossary by the Asian Xiangqi Federation that was published decades ago. (5) (6) 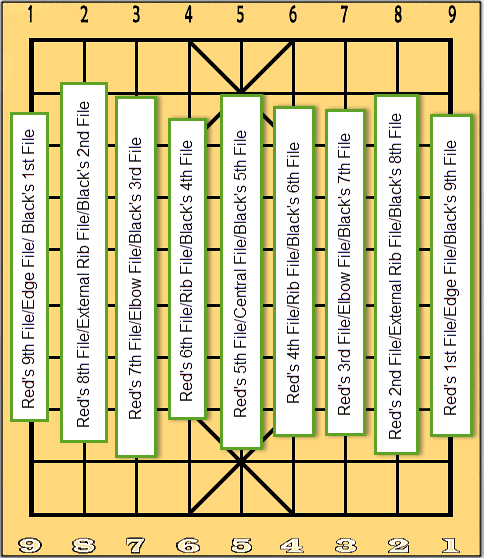 Each rank would also have a unique name, as shown below. 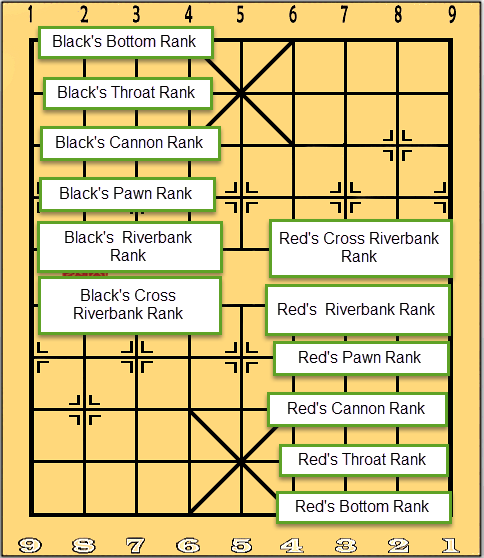 For descriptive purposes, the Webmaster strongly recommends mentioning the color when describing the position of a piece. For example, it would be better to say “Red advanced his Cannon to Black’s Pawn Rank,” which would be a clear indication that the Cannon has crossed the River and was not advanced to his own Pawn Rank.

However, because the name is so established in Chinese literature, by default, certain moves or variations are so well-known that there is no need to mention the color. An example would be the Double Pawn Ranked Cannons Variation of the Screen Horse Defense.

The importance of knowing the names of the main files and ranks cannot be understated. Xiangqi can be discussed only when the people discussing know how to describe a piece that has moved or describe the important regions on the board.

There is a space in the middle that represents the RIVER, which separates the two opposing colors. The four corners of the chessboard are known as BOARDCORNERS.

There are unique squares that contain two diagonal lines in them. These two squares face each other across the River, and each square is known as the PALACE (九宮jiǔ gōng). Another Chinese name would be 九宫格 jiǔ gōng gé. The King and his two Advisors cannot leave their palace.

Many openings are named regarding the palace like the Cross-Palace Cannon Opening and the Palcorner Cannon Opening (see Glossary of terms). There are four PALACE CORNERS for each palace, which has been abbreviated as ‘PALCORNER.’ However, by default, ‘Palcorner’ would refer to one of the two palace corners ON THE CANNON RANK.

There are a few intersections that have extra markings on them. The markings are known as BOARDSTARS (盘星 pán xīng), and they help distinguish where the Pawns and Cannons are placed in the initial array. (5)

Sometimes, additional Chinese verses are found on the side of the chessboard.

观棋不语真君子 (guān qí bù yǔ zhēn jūn zǐ) means that onlookers (观棋) should not comment(不语) on the game during active play and that such behavior is the mark of a true gentleman (真君子). Simply put, no kibitzing is allowed.

Another commonly seen verse would be 起手无悔大丈夫 (qǐ shǒu wú huǐ dà zhàng fu) which is translated as a man of his words (大丈夫) would make his moves without regret (无悔) and will not try to take back a move. Simply put, it would be a reminder that no take-back of the moves is allowed.

The Naming of the Files and Ranks

HOW THE FILES ARE NUMBERED IS VERY IMPORTANT TO KNOW OR ELSE YOU WOULD HAVE TROUBLE READING OR WRITING THE NOTATIONS.

Please refer to the article on Xiangqi Notation for more.