Xiangqi (aka Chinese Chess, 象棋 xiàngqí ) is a turn-based game of strategy that is played by two players. Although millions across Asia play the game, it is not very well-known outside of the Chinese-speaking realm. A lot of Westerners believe Xiangqi to be the same as Chinese Checkers, Go, Shogi, Janggi, or other forms of oriental games. The goal of www.xqinenglish.com is to spread the game to the world. And the first order of business and perhaps the most important article would be to share with the West how to play the game itself.

How to Play Xiangqi

Learning how to play a game of Xiangqi would mean to learn how to move the chess pieces on the Xiangqi chessboard to capture the enemy king. There are seven different types of Xiangqi chess pieces, and each piece has its way of moving and capturing enemy pieces. Simple rules are followed, and the main objective is to capture the enemy king. This article will contain a very short summary of how to play Xiangqi.

To play a game of Xiangqi, a Xiangqi set which includes a chessboard and chess pieces. The board should be big enough to accommodate the chess pieces, which are divided into two colors: Red and Black by default.

The following are the most basic rules that a player must know.

There is a special rule in Xiangqi that is called the Royal Rule that was coined by Mr. Felix Tan, a very well-respected Xiangqi promoter from Singapore. This rule will be introduced in the sub-section introducing the King.

However, the Webmaster would suggest that the interested reader approach his nearest local Xiangqi association and ask them for help.

The rules published by the Chinese Xiangqi Association is the golden standard for tournaments inside China. The latter set of rules is much harder and taxing on the competitors. It was designed purposely in such a manner to decrease the number of games ending in a draw.

Note: In Xiangqi, by default, Red would make the first move, and thus have the first-move initiative. However, this was not always so. For reasons not known to the Webmaster, when the CXA was first formed in 1956, the committee in charge of the rules decided that Black was the first to move. The decision was reversed in 1981. This interesting rule would explain why in some of the older Xiangqi manuals, the diagrams are arranged such that Black would be placed at the bottom of the page, and Black would go first.   (2 页 11)

In ancient times, Red was the first to move.

Differences in the Rules as compared to International Chess

There are several important differences that any player with a background in International Chess must know when playing Xiangqi.  They include:

The next thing to learn would be an introduction to the Xiangqi chessboard and the pieces. 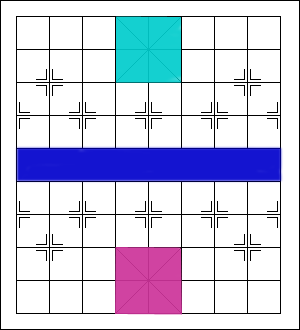 A Xiangqi chessboard would look like the diagram shown on the right:

The space in the middle, shaded blue, is the river. Sometimes, the Chinese ideograms 楚河汉界 is inscribed in the river to remind players of the Chu-Han Contention (206-202BC).

There are four squares with diagonal lines running in them located at both ends of the board (shaded turquoise and red). Collectively, these four squares would make up the palace for one color. The King and his two Advisors cannot leave the palace, and each color has its palace.

The reader is encouraged to read the article introducing the Xiangqi Chessboard for more information.

The chess pieces are played on the INTERSECTIONS, not in the squares. And each intersection can only be occupied by a maximum of one piece at all times.

For readers simply bored with reading, please click here for a video that Webmaster has uploaded to Youtube. 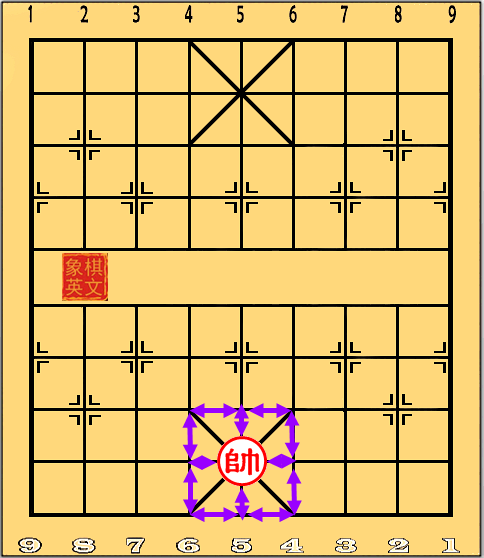 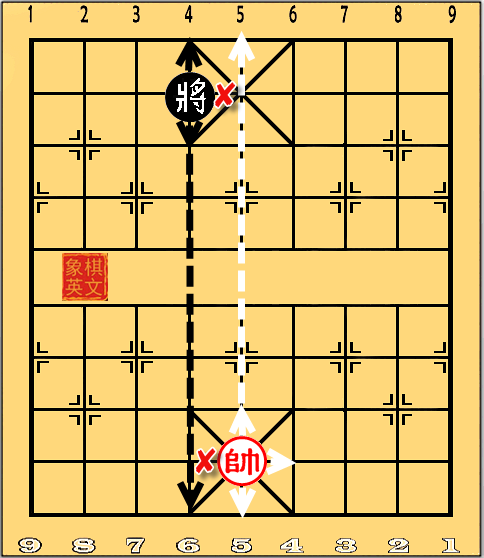 The Royal Rule states that the opposing Kings CANNOT FACE EACH OTHER IN THE SAME FILE WITHOUT ANY INTERMEDIATE PIECE.

As can be seen in the diagram on the right, the Black King cannot traverse to the central file.
The Red King cannot move to the file on his left or the Royal Rule would be breached.
This special Royal Rule would grant the King a chariot-like power in the endgame phase. 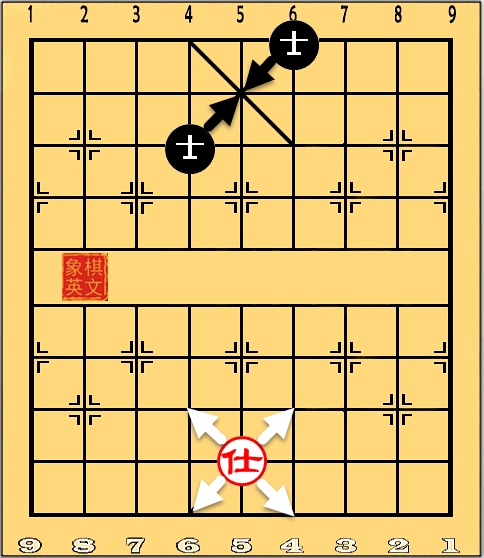 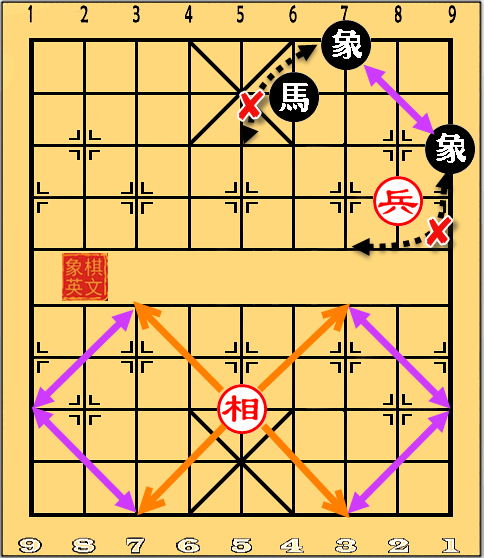 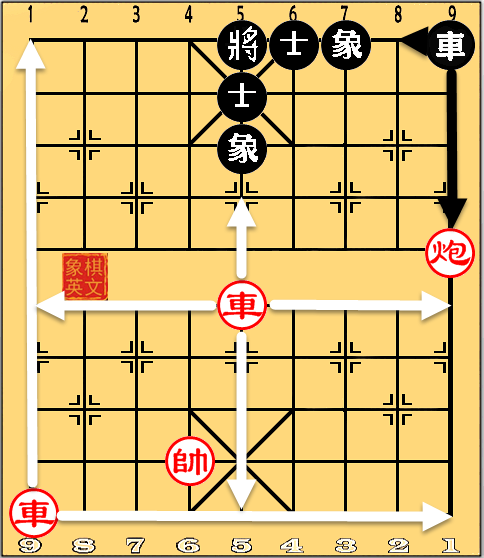 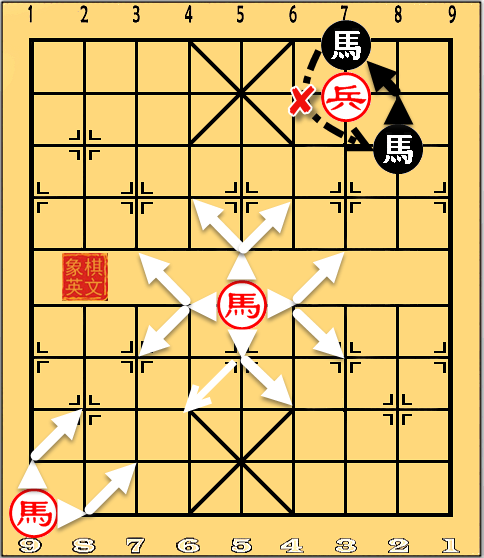 Both Red and Black = 马mǎ. 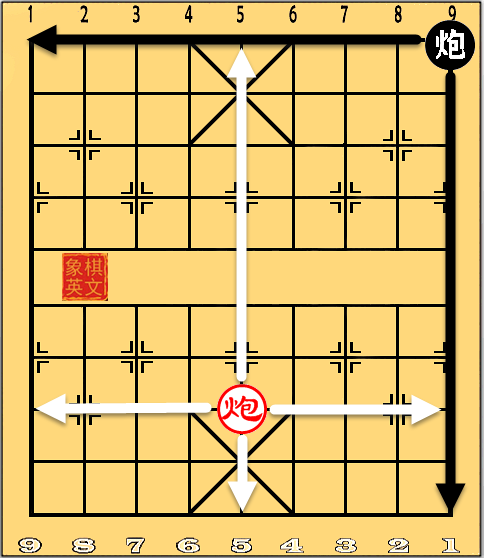 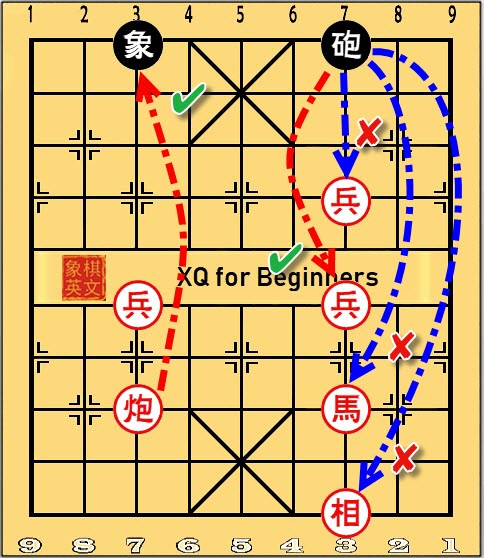 As can be seen in the adjacent diagram, the Red Cannon can capture the Black Elephant by jumping over the Red Pawn. (dotted Red arrow).

The Black cannon can only capture the Red Pawn on the Riverbank and no other piece.

The Cannon is perhaps the most intriguine piece to players with a background in Interational Chess.

Placing a Cannon on the line would give 'control' to the player as any enemy piece that is moved to the same file could be used as a Cannon Mount.

The Cannon Mount has also been described with other names in the past, but the official term is as such. 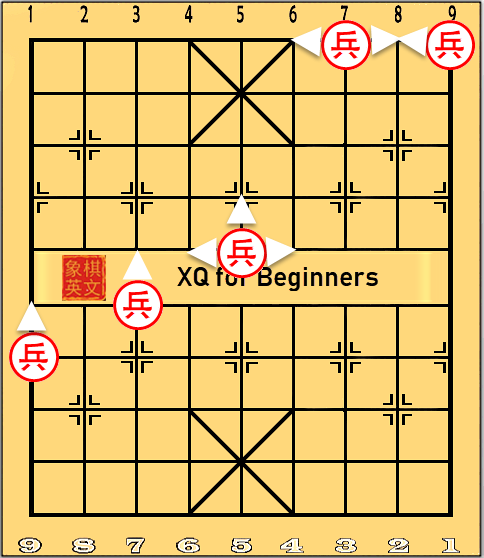 The following table has been collected from many books and represents the consensus on the value of each piece. It is only to be treated as a very rough estimate because other factors such as position or tactical combinations et cetera greatly affect the value of any piece.

The starting position of the pieces is shown below. It is known as the array. 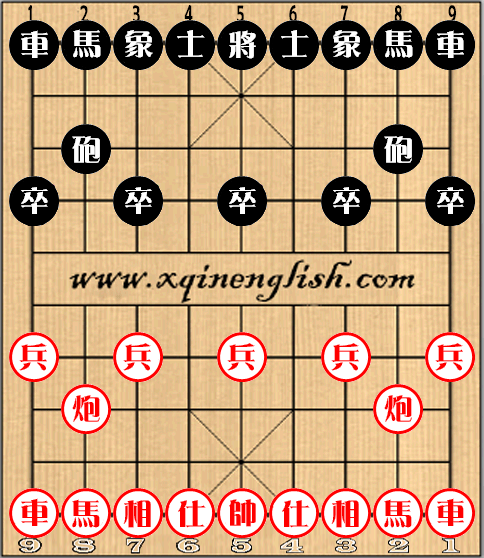 Some reflections on the use of Chinese characters/ideograms, 2D, and 3D pieces:

There has been much debate over the internet in different Facebook groups and other forums about the issue of recognizing Chinese characters or ideograms. There are two polarizing groups:

Some folks in the latter two groups even advocate using three-dimensional pieces to represent the chess pieces as they claim that it would help promote Xiangqi better. This issue would be discussed in another article.

However, for the sake of argument, while there is nothing wrong with starting off with three-dimensional pieces or inscriptions instead of Chinese characters/ideograms, if you were to play ultimately in tournaments, the official Xiangqi sets would contain circular discs with Chinese ideograms inscribed on them.

For a general overview of Xiangqi,

For more about Xiangqi and its technical aspects, please refer to the following links:

An introduction of the chessboard,

The game itself is further divided into three phases:

Each of the phases will have its sections on the Website.

In the following section, the Webmaster will go through each item in detail.

Before the Webmaster continues, he would like to remind the visitor that:

the OFFICIAL name for the game is Xiangqi, not Chinese Chess.

There are many posts, blogs, and apps on the internet that continue to use 'Chinese Chess' in their articles, which is acceptable, but they fail to acknowledge the official name. More often than not, the translations of the terms were not based on the recommended terms found in the World Xiangqi Rules.
To promote Xiangqi, the Webmaster has chosen to use Xiangqi (Chinese Chess) in his articles, or simply Xiangqi.

FAQs about How to Play Xiangqi

For visitors new to the site, the Webmaster has compiled a list of frequently asked questions and added links to various pages on the Website:

How do I play Xiangqi (Chinese Chess)? --> See article above.

Is Chinese Chess harder than Chess? ... and other comparisons between Xiangqi and International Chess. Click here.

Who goes first in Chinese Chess? --> See Rules of Xiangqi above.

What are the rules for a simple game of Xiangqi? ---> See Rules of Xiangqi above.

Where can I play Xiangqi? ---> For online play, click here.

Is there a stalemate in Xiangqi? --> Yes, but unlike International Chess, a stalemate would be counted as a loss for the King placed under stalemate. You cannot refuse to move in Xiangqi. See Rules of Xiangqi above.

If there are any more questions, please email the Webmaster at This email address is being protected from spambots. You need JavaScript enabled to view it., and he will do his best to answer you.